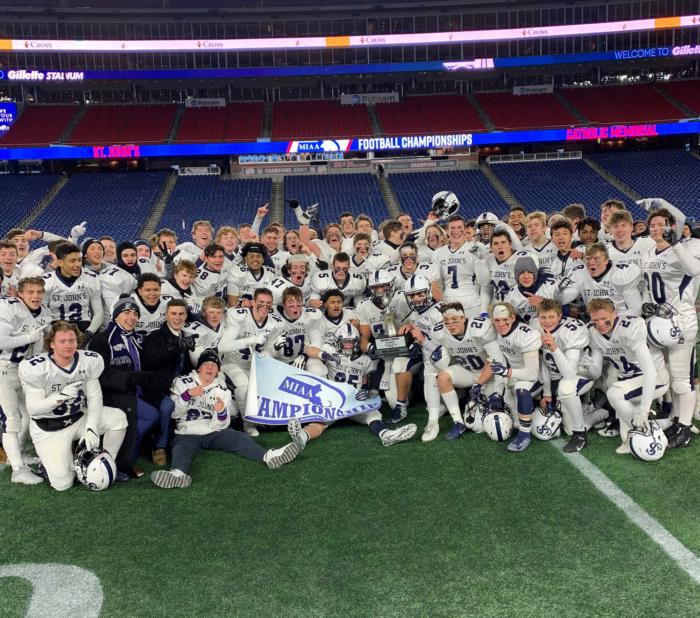 Beginning a new rivalry, and playing at Manning Field in Lynn on Thanksgiving eve, the visiting Cougars from Austin Prep had a nice time, beating St. Mary's 32-14. Led by Billy Tucker, Austin Prep ends at 5-6. St. Mary, led by Sean Driscoll, ends at 6-5.

Playing at home on Thanksgiving Eve, the Lowell Catholic Crusaders had a great season come to a disappointing end with a 35-0 loss to their city rival. Lowell Catholic was led by Jason Houston. As a result of the game, both teams end at 8-3.

The boys from Cardinal Spellman travelled over to Braintree on Thanksgiving morning and beat their rival by a score of 35-8 and captured the Catholic Central Large title, too. Spellman, led by Ron St. George, ends at 7-3. Archbishop Williams, led by Matt Reggiannini, ends at 5-6.

Playing at Veterans Stadium in the city of Lawrence on Thanksgiving morning, the Central Catholic Raiders ended a great season with a 23-14 win over their city rival and clinched sole possession of the Merrimac Valley Conference Large title. Led by Chuck Adamopoulos, Central Catholic ends at 9-2. Lawrence High School ends at 2-9.

Playing at home in West Roxbury on Thanksgiving morning in the Pumpkin Bowl, the CM Knights beat their rival by a close score, 19-14. Previously, CM repeated as Division 1/South title champions on Nov. 15, beating Franklin 42-8. Their undefeated season came to an end with a loss to St. John Prep in the Division 1 Superbowl on Dec. 7. Led by John DiBiaso, Catholic Memorial ends at a remarkable 11-1. BC High, led by Jonathan Brillo, ends at 6-5.

Playing at home in Danvers on Thanksgiving morning, the Eagles defeated the visiting Hawks from Westwood with a decisive 35-0 win. Previously, Prep won the Division 1/North title on Nov. 15 and advanced to the Division 1 Superbowl for a rematch with Catholic Memorial at Gillette Stadium on Saturday, Dec. 7. In an exciting game amid cold temps, Prep won 21-14, repeating as Superbowl champs. Led by Brian St. Pierre, St. John Prep ends at 11-1. Xaverian, led by Al Fornaro, ends at 4-7.