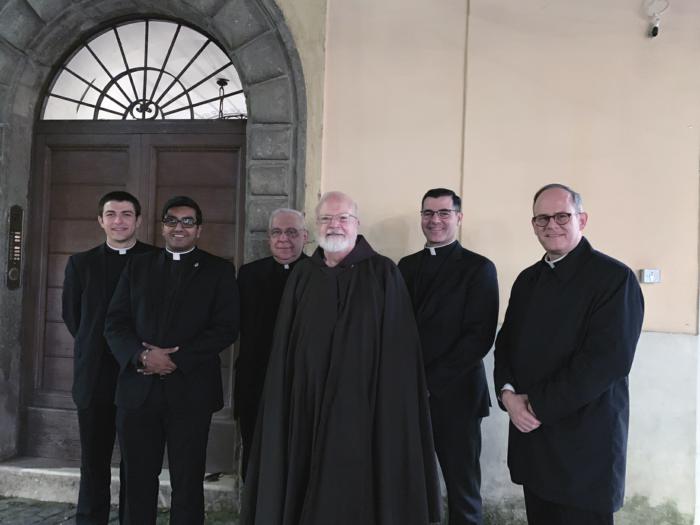 Cardinal O'Malley poses for a photo with Boston priests and seminarians in Rome. He returned to Rome to attend meetings with the Holy Father and the Council of Cardinals. Pilot photo/CardinalSeansBlog.org

There has been a long-standing tradition in Boston of the archdiocese and the Greek Orthodox Metropolis exchanging delegations on our patronal feasts, mirroring the practice of the Ecumenical Patriarch and the Holy Father. Each year, the Holy Father sends a representative to Constantinople to be with the Ecumenical Patriarch for the feast of St. Andrew in November, and the Patriarch reciprocates on the feast of Sts. Peter and Paul in June.

Last Friday evening was the vigil of the feast of St. Andrew, so I went to the Greek Orthodox Metropolis to join their Vespers Service for the feast.

The five loaves are a symbol of St. Andrew because it was St. Andrew who pointed out the boy with "five barley loaves and two fish" at the Miracle of the Loaves and Fishes.

It was a very uplifting celebration and I always look forward to these opportunities to pray together with our Orthodox brothers and sisters.

Then, on Saturday, I had the joy of ordaining Father Francis Pham to the priesthood at Our Lady Comforter of the Afflicted Parish in Waltham.

He was serving his pastoral year in Nova Scotia and was unable to be ordained with the rest of his class earlier this year.

We were glad that many of Father Francis' siblings, aunts, and uncles were able to be there with us, but the Mass was also live-streamed so that his mother in Vietnam would be able to share the day with us, as well.

There was also a very large contingent from the local Vietnamese Catholic community as well as many people from the different parishes where Father Francis had served, including a busload of people who came down from St. Marguerite Bourgeoys Parish in Sydney, Nova Scotia, with their pastor, Father Bill Burke.

It was a beautiful bilingual celebration with readings and songs both in English and Vietnamese.

It was a joyous day, and we are very blessed to have a new priest to help us in ministering to the large Vietnamese Catholic community in the Archdiocese of Boston.

We are so grateful to Father Jim DiPerri and parishioners from Our Lady Comforter of the Afflicted for their gracious hospitality.

Following the Mass, I returned to Rome for meetings with the Holy Father and the Council of Cardinals.

Of course, it is the first week of Advent, so I was very happy to see the Vatican creche as well as the Christmas tree, which is a gift of the people of the city of Trent.

It was a very beautiful sight. I have never seen St. Peter's Square as lit up as it was this year.

And, on Sunday evening, I got together with our Boston priests and seminarians who are in Rome.

Our meetings with the Holy Father began on Monday, and we continued our discussions on the draft of the new Apostolic Constitution, particularly the relationship between the curia and the various bishops' conferences, as well as the importance of having laypeople in decision-making roles in the Church.

We also heard from Cardinal Michael Czerny, who addressed us about the post-synodal document coming out of the Synod of Bishops for the Amazon. I offered some remarks on the synod, as well. They were very much along the lines of what I shared with the U.S. Bishops Conference at our fall meeting and with the priests of the Archdiocese of Boston at our convocation.