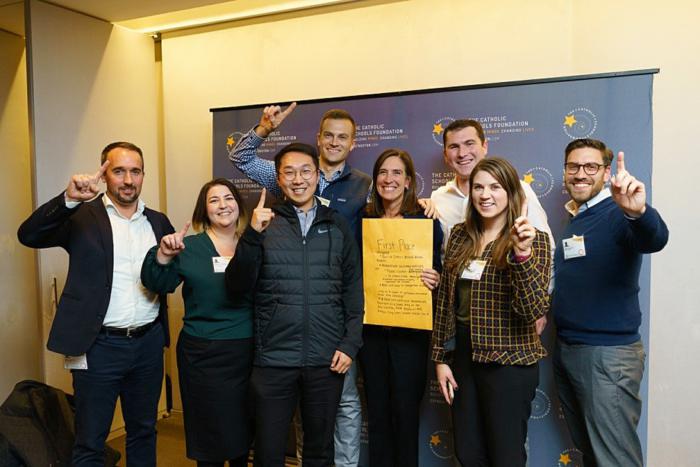 BOSTON -- On Nov. 4, 16 corporate teams gathered at State Street's One Lincoln Street office to raise money for the Inner-City Scholarship Fund (ICSF) through the sixth Annual Corporate Trivia Challenge. The hosting sponsor, State Street Corporation, has supported the work of the ICSF for nearly 30 years and has been the lead sponsor of this event for five years. Through sponsorships and live fundraising at the event, $40,000 was raised to provide scholarships to at-risk young people.

The ICSF is the signature program of the Catholic Schools Foundation (CSF). Through this fund, over 4,000 students each year receive need-based scholarships to attend high-quality Catholic schools in eastern Massachusetts. All CSF scholarship recipients graduated from high school last year and 98 percent went on to college.

Attendees of the event heard from Kathy Horgan, executive vice president and chief human resources and citizenship officer at State Street Corporation, as well as Julian Delgado-Figueroa, former CSF scholarship recipient and current freshman at the College of the Holy Cross in Worcester.

"Being raised in an inner-city was an experience to say the least," said Delgado-Figueroa. "Waking up to no running water or waking up in darkness because my family couldn't afford to pay the power bill were both realities I faced more than once.

"(When I) received a scholarship from the ICSF to support my education at St. John's Prep ... I expected the support to just be a check that would fund my education, but what I received was way more than that. The ICSF was a support system I could constantly rely on," he said.

"State Street has been a proud supporter of the ICSF for nearly 30 years. In that time, we have donated over $2 million in scholarship and programmatic aid to support low-income, inner-city students," explained Kathy Horgan. "We are proud to partner with the ICSF as part of our strategic focus to support education in Boston and invest in the future of our community."

Kristina Valente of BNY Mellon Wealth Management also sponsored and emceed the event. Valente, an active member of the ICSF's Young Leaders Council, has emceed the Corporate Trivia Challenge since its inception. Also in attendance was legendary investor Peter S. Lynch, president emeritus of CSF and chair of the ICSF.

The winners of the evening were "The MC's" composed of MC Partners, Choate Hall and Stewart, and Wellington Management. In second place was "Addition by Subtraction," captained by Mike Rogers, president of CSF's Board of Trustees and retired president and COO of State Street.

More information on the Inner-City Scholarship Fund is available at their website at www.icsfboston.org.