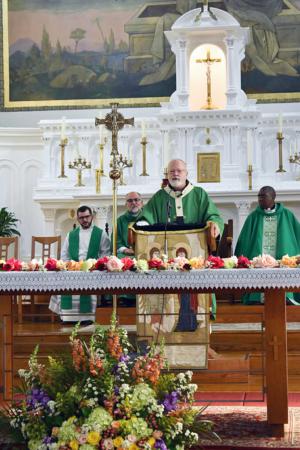 On Sunday, Nov. 3, Cardinal O'Malley visited Our Lady of the Assumption Parish in East Boston for a Mass to mark the parish's 150th anniversary. Pilot photo/CardinalSeansBlog.org

Last Friday, All Saints Day, I was very happy to visit St. Francis Chapel in the Prudential Center to celebrate a Mass to mark the 50th anniversary of the chapel's founding by Cardinal Richard Cushing. (As I often quip, I could spend my whole life celebrating 50th anniversaries of initiatives that Cardinal Cushing started!)

For the first few years of its existence, the chapel was staffed by the Franciscan Friars from Arch Street but, since 1983, it has been under the care of the Oblates of the Virgin Mary. They have given yeoman's service there, with Masses, confessions, spiritual direction, and many other activities. The great impact that the chapel has had was evidenced by the standing-room-only crowd at the Mass. I was very happy to be there with Father Tom Carzon; the Provincial, Father Jim Walther; and the other oblates.

This was one of the many workers' chapels created by Cardinal Cushing, which also include the Seaport Chapel, the Airport Chapel, and the chapels in the North Shore and Westgate Malls. They are just one more indication of Cardinal Cushing's desire to bring the Church close to where the people are, and all those initiatives have been very successful. Now, 50 years later, we look back with great gratitude and pride at what he began.

On Saturday, I went to St. Raphael's Parish in Medford to celebrate the funeral Mass of Bishop Frank Irwin, who passed away Oct. 30. Of course, it was All Souls Day, a very fitting day to celebrate the bishop's funeral.

We were joined at the Mass by many of his family and friends, as well as a great number of priests. There was even a contingent from St. Pius X Parish on the Cape, where Bishop Irwin celebrated Mass so often in his retirement. Unfortunately, a number of the other bishops had already departed for Rome for the ad limina visit and so were unable to attend.

Father Michael Guarino, a very dear friend of Bishop Irwin, delivered a beautiful and moving homily, in which he highlighted Bishop Irwin's great faith, love of the Church, and his famous sense of humor.

He was very beloved and he will be sorely missed.

Our Lady of the Assumption Parish

On Sunday, I went to Our Lady of the Assumption Parish in East Boston for a Mass to mark the parish's 150th anniversary. I was very happy to be joined by the administrator, Father Ignatius Mushauko, as well as many other priests associated with the parish.

During my visit, I was very happy to see the many new renovations to the parish. Every time I visit, they always seem to have made new improvements.

After the Mass, there was a reception in the parish hall.

I gave a greeting to the people, but was unable to stay long because I had to leave for Rome to join the other bishops on the ad limina visit.

The "ad limina" is a visit to the Holy See that every bishop is required to make every five years to meet with different dicasteries and the Holy Father. The visits consist of making a report on the status of the diocese, and it is also an opportunity to be with the Holy Father. The bishops take turns making the ad limina by regions, and our group included 18 bishops of New England from the Boston and Hartford provinces.

Also on Thursday afternoon, we met with the Pontifical Commission for the Protection of Minors, of which I am the head.