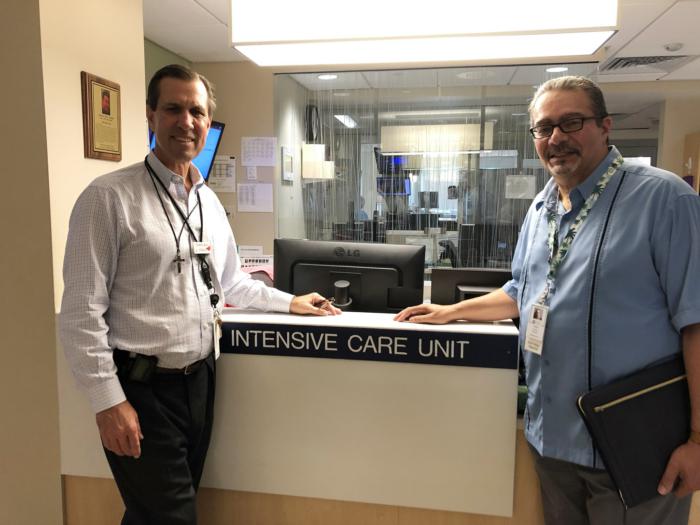 BOSTON -- While most Catholics know hospitals often have a Catholic chaplain on staff, they may not be aware that some hospitals also have pastoral visitors. These are lay volunteers who visit with patients and families, tending to their spiritual needs and more. And, although pastoral visitors are volunteers, they undergo significant training to prepare them for this most sensitive role.

One such volunteer is San Jorge Santiago, who has been serving as a pastoral visitor at Lawrence General Hospital for the past year and brings another dimension to the role. Born in New York City and of Puerto Rican heritage, he is fluent in Spanish and very familiar with the Hispanic culture. As the city of Lawrence has a high Hispanic population, those skills are invaluable.

Santiago, who has a master's degree and a Ph.D. from Boston University, recently retired from teaching at Northern Essex Community College in Lawrence, where he was a sociology professor. His wife, Luz Carrion, a wedding planner, is heavily involved in the Church as well, serving as a catechist. Their daughter, Gabriela Colon, is finishing her bachelor's degree in nursing at the University of Massachusetts in Lowell, having graduated from high school at Central Catholic in Lawrence.

Santiago had spent a year volunteering as a eucharistic minister at the hospital but decided he needed to do more.

"I wanted to spend more time talking to the patients and their family members," he said. Santiago is a member of the Cursillo Movement, which has as its goal to share with the community the essence of Christianity and Christian values and in this way gradually transform the community from within. Participants, known as "Cursillistas," consider themselves as soldiers of Jesus Christ.

"In his restlessness to do more for the building of the kingdom of God, Jorge came to me and asked if there were something more he could do," said Craig Gibson, chaplain at Lawrence General. "I told him we could provide him with training to become a pastoral visitor."

Santiago sought further guidance from his pastor, Father Paul O'Brien, and parochial vicar, Father Alonso Macias, both of St. Patrick's Parish in Lawrence, who agreed that a pastoral visitor role would be a good fit.

"He is flourishing far beyond expectations," Gibson said. "He serves to the great delight and deep appreciation of patients, families and even, at times, staff members."

Santiago generally makes his pastoral visits twice a week. Each time he might see anywhere from 14 to 28 patients. "The main purpose of a pastoral visit is to help the patient or loved one identify any spiritual distress, to see where they are coming from spiritually," he said. "I ask the guidance of the Holy Spirit to gauge where they are at."

Santiago's understanding of the Hispanic culture helps him in reaching out to his patients. "As a member of the same community, it helps me to better understand what they are going through."

Father Chris Casey, pastor at Our Lady of Good Counsel in Methuen and local vicar forane, applauds Santiago for his training and his heartfelt service. Father Casey recognizes the many ways that well-trained pastoral visitors can make a big difference, especially those with bilingual language capabilities.

As rewarding as the work is, it can be emotionally challenging. This is particularly true when a patient has died.

"For patients who are dying or for their loved ones, praying together brings them closer to God," Santiago said.

But most of the time, he said, it's the joy that fills him.

"In the morning, I might be dragging, but by the end of the day, I'm feeling up. The patients are happy to see me, they bless me for coming by for the visit. It's so fulfilling. When I come home, I say my prayers and thank the Lord for the presence of the Holy Spirit that has guided me through the visits."