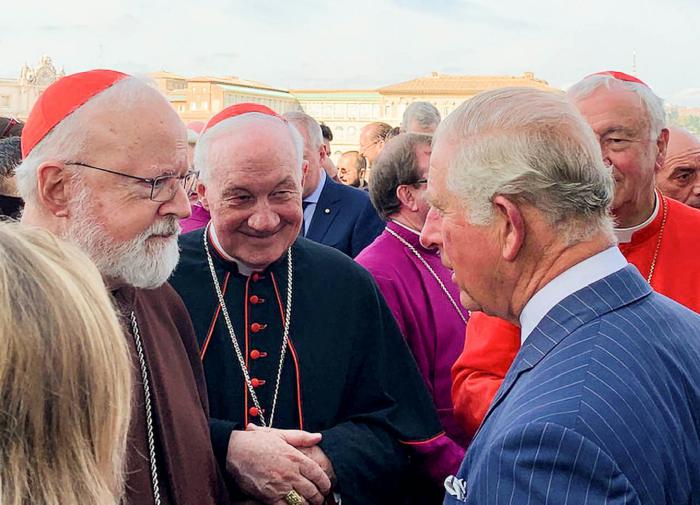 Following the canonization Mass of five new saints, including St. John Henry Newman, Cardinal O'Malley attended a reception at the Pontifical Urbaniana University, where he had the opportunity to meet the Prince of Wales. Pilot photo/CardinalSeansBlog.org

Last Sunday, I had the joy of attending the canonization of five new saints at St. Peter's Basilica, including St. John Henry Newman.

For those who are not familiar with him, Cardinal Newman was an English academic and theologian born in 1801 who, by the age of 27, had become an Anglican priest teaching at Oxford. He was the vicar of the university church and published a number of important theological works.

While at Oxford, he became one of the key figures of the Oxford movement among the Anglicans, which was sort of a push to turn the Anglican Church more toward its Catholic roots. Through his studies, he became more and more convinced that the Catholic Church was the true Church established by Christ. So, in 1845, he asked to be admitted to the Catholic Church. He studied in Rome and, in 1847, he was ordained a Catholic priest and joined the Congregation of the Oratory of St. Philip Neri, better known as the Oratorians.

After returning to England, Newman, of course, continued his theological work but he also founded Oratory houses in Birmingham and London, and was instrumental in the founding of the Catholic University of Ireland.

In 1879, Pope Leo XIII named him a cardinal, but he asked to be able to remain at his Birmingham Oratory to continue his work. He died in 1890 and is considered by many to be one of the most important English-speaking theologians of the modern era.

Cardinal Newman's canonization was a wonderful event that drew a great deal of attention from all over the world.

There were many Anglican bishops and clergy at the canonization. Clearly, though he eventually converted to Catholicism, the Anglicans still have a great affection for him and feel as though he made a very important contribution to the Anglican Church as well as the Catholic Church.

Reception at the Pontifical Urbaniana University

After the canonization on Sunday afternoon, there was a reception at the Pontifical Urbaniana University, the university run by the Congregation for the Evangelization of Peoples. Before his conversion, Cardinal Newman had studied in the Urbaniana, which was the seminary for the mission countries (including the United States before the founding of the Pontifical North American College).

Everyone at the reception received the gift of the book "Meditations and Devotions of Cardinal Newman."

Perhaps the highlight of that reception for me was the opportunity to meet the Prince of Wales.

He spent time talking to everyone, and I was gratified by how friendly he was to the many people he met and that he seemed very sincerely pleased to be a part of the Newman celebration. In fact, the day before the canonization, he penned an article in l'Osservatore Romano on Cardinal Newman (www.vaticannews.va/en/vatican-city/news/2019-10/newman-canonization-prince-charles-editorial-britain.html).

Synod on the Amazon

Of course, I remain in Rome attending the Synod on the Amazon, where we are continuing our work in small groups.

Next week, we will prepare a final draft of the synod document to be presented to the Holy Father. I will certainly share more about our activities at the synod with you then.