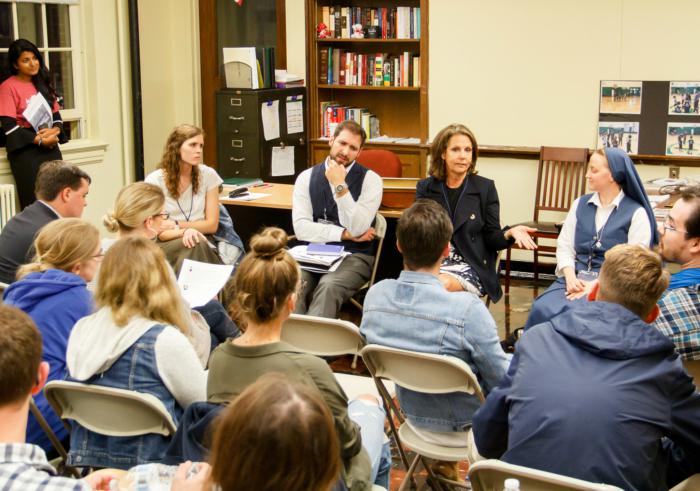 Young adults take part in the arts and media breakout session during the inaugural Connect Boston event for students and young professionals at the Cathedral of the Holy Cross, Oct. 2. Pilot photo/Jacqueline Tetrault

BOSTON -- Faith and work were united on Oct. 2 as the archdiocese's Office of Campus Ministry held its first Connect Boston event at the Cathedral of the Holy Cross.

Over 700 young adults, including students from 28 different colleges and universities, came to network with Catholic peers, industry leaders, and organizations. The evening included speakers and panel discussions with professionals from various fields, including business, the arts, and religious vocations.

Several Catholic ministries, businesses, and young-adult groups set up exhibitor tables in the Cathedral High School gym, where pizza and sandwiches were served for dinner before the speaking program began.

Sarah Barry, a member of the administration of St. Benedict Classical Academy, told the Pilot she was attending Connect Boston to support her school's headmaster, who was to be a panelist in one of the breakout sessions.

"I think it's a wonderful opportunity for young people to connect and to learn more about fields either that they're in or are interested in, and meet other people that they can bounce ideas off of," she said.

Elizabeth, a recent graduate of the University of Rhode Island who attended Connect Boston, said it was "cool to meet professionals who are already working in their field but also practicing their faith."

"You never hear about professionals having their Catholic faith so close to their heart, so meeting other people who value that is just awesome," she said, speaking with the Pilot as she ate her dinner on the gym bleachers.

The attendees returned to the cathedral for the speaking program. Frederica Wade, a member of an advisory group for the Office of Campus Ministry and a fourth-year FOCUS missionary at Harvard Catholic Center, served as the event's emcee.

The first speaker was Jennifer Baugh, the founder of Young Catholic Professionals, a nonprofit organization that helps young working people connect with each other and grow in their faith.

Baugh talked about how she started her ministry, which now has 20 chapters across the country. She drew lessons from the life of St. Joseph, patron of workers, pointing to him as a model of perseverance, humility, and fortitude.

Attendees also heard from Curtis Martin, the founder of FOCUS, the Fellowship of Catholic University Students.

Martin encouraged the young adults to spend 10 or 15 minutes each day reading the Bible. He read aloud from Luke 2 about the call of Peter, a fisherman who quit his job after the best catch of his life in order to follow Jesus.

Martin explained that some people may be called to quit their jobs, while others may be called to continue their jobs while living "radically." As an example, he told the attendees about Jan Tyranowski, a Polish tailor who taught catechesis to young men during the Nazi occupation. Ten of the men he mentored became priests, and one of them became Pope John Paul II.

Martin said he is convinced that this generation of Catholics is responsible for their own generation, though he did not know who was called to help others and who was called, like Jan Tyranowski, to raise up a generation that would rescue others.

The group then reconvened in the cathedral to hear the evening's final speaker, Cardinal Seán P. O'Malley, who spoke about the importance of faith and community.

He said Jesus taught that, "discipleship is never a solo flight. We learn to be people of faith the way we learn a language, by being part of a community that speaks that language."

"We must break habit of giving the impression that people can be Christians and remain strangers," Cardinal O'Malley said.

He spoke of a visit he once made to the Holocaust Museum in Washington, D.C. There, he was struck by a letter written to educators by a teacher who had survived the Holocaust. The teacher expressed great suspicion of education, since he had seen atrocities committed by learned people. Cardinal O'Malley reasoned that while science and technology can help people understand the world, they cannot teach value, meaning, or the purpose of life.

"Our faith is a light that helps us to see deeper into reality, to discover the loving presence of God. And, in discovering God, we discover who we are, why we're here, and what we have to do with our lives," he said.

The evening ended with a period of Eucharistic adoration, culminating in a procession throughout the cathedral.

In the closing announcements, Frederica Wade said the attendees can stay connected through the Connect Boston website (www.connectboston.network) and that it would be possible to host a similar event of a smaller scale on their campuses.

Speaking to the Pilot on Oct. 8, Father Cadin said the attendees left "filled with confidence and hope that the Church in Boston is alive and they're not alone."

He added many had expressed that meeting the speakers from different industries showed them "how faith can sustain a person in their life and be a source of strength in their career."

"There were a number of students who left saying it made them very hopeful for their life post-college," Father Cadin said.