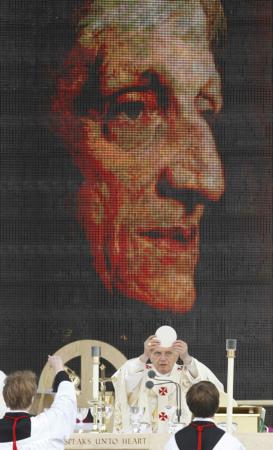 BRAINTREE -- While people around the world eagerly await the canonization of Cardinal John Henry Newman on Oct. 13, two members of the Archdiocese of Boston have deeply personal reasons for their interest in the event.

The Archdiocese of Boston is the home of both Carol Mahoney, a direct relation of Newman, and Deacon Jack Sullivan, whose miraculous healing led to Newman's beatification.

Carol Newman Mahoney, a member of St. Anne Parish in Littleton, is related to Cardinal Newman through her mother and grandfather. Cardinal Newman is her second cousin once removed.

"Who is so lucky to say their cousin is a saint?" she said in an Oct. 8 interview with the Pilot.

Mahoney and her husband had planned to go to the Vatican for the canonization, but ultimately decided to stay home for health reasons. Mahoney said her daughter will attend the canonization, while Mahoney plans to wake up early on the morning of Oct. 13 to watch the ceremony on EWTN.

In the Sept. 22 bulletin of St. Anne -- St. Catherine Faith Community, Mahoney said her family has been waiting for this for "quite some time."

"We pray to him all the time, and it is a great comfort. Moreover, we encourage everyone to pray to him," Mahoney said.

Deacon Jack Sullivan of St. Thecla Parish in Pembroke has had a great devotion to Cardinal Newman for almost two decades. In early June 2000, between his second and third years of formation for the permanent diaconate, Deacon Sullivan developed a debilitating spinal condition, causing extreme pain in his back and legs. He was disheartened by the prospect of giving up his studies for the diaconate in order to undergo and recover from surgery.

During that time, Deacon Sullivan heard Newman biographer, Father Ian Ker, speak on television about Cardinal Newman's life. The program ended with an invitation to send the postulator of the cause for Newman's canonization details of any "divine favors" received as a result of his intercession. Inspired, Deacon Sullivan prayed to Newman, requesting that he would be able to walk so he could return to his studies and be ordained.

"I didn't pray for complete healing, for that would be too presumptuous; merely to grant me this small 'divine favor' which at that time was so urgent," Deacon Sullivan wrote in his essay, "I Believe in the Communion of Saints," on his blog.

The following morning, Deacon Sullivan woke up completely free of pain with full strength in his back and legs. His doctors' examination found that his condition had not changed, yet he was no longer experiencing the debilitating pain that he had before. His surgery was canceled and he was able to attend his classes for the next nine months.

After the last day of classes in April 2001, the pain returned. Deacon Sullivan completed his prerequisite pastoral internship in a wheelchair, and he continuously prayed to Cardinal Newman for strength.

"It was Newman's ongoing support that helped me to persevere through these most difficult times," Deacon Sullivan said in his essay.

He underwent surgery in August 2001, but due to complications, his recovery was expected to take many months. Five days after the surgery, he made the same petition to Cardinal Newman -- that he would be able to walk so he could be ordained. He immediately felt "intense heat and a strong tingling feeling" throughout his body, as well as a sense of "joy and peace." He was then able to walk unassisted without pain.

Deacon Sullivan's relationship with Newman continued over the years as he shared the story of his miraculous cure and held healing services for the sick and injured.

"Our encounter with saints is seldom a one-time situation but an ongoing process of both friendship and reverence," Deacon Sullivan, now 81 years old, said in an interview with the Pilot.

He obtained a relic of Newman, a lock of his hair, to bring to healing services. Deacon Sullivan said there have been 30 instances of medically unexplainable healings attributed to Newman's relic and intercession.

The miracle that led to Newman's canonization as a saint took place in 2013. Melissa Villalobos of Chicago prayed for Newman's intercession and experienced a miraculous healing during a difficult pregnancy. Villalobos waited until after the birth of her daughter before reporting the healing to the promoters of Cardinal Newman's cause for canonization.

The Newman biographer, Father Ker, put Villalobos in touch with Deacon Sullivan, who helped her document the miracle, since he was familiar with the process. The two became close friends, and Deacon Sullivan was named the godfather of Villalobos' son, who was born a year after the "miracle baby."

"I even suggested his name -- John Henry," Deacon Sullivan told the Pilot.

Deacon Sullivan noted that it is "quite unusual" for the two miracles required for canonization to happen only a few years apart and in the same country. Usually, he said, hundreds of years pass between the first miracle and the second miracle.

"I don't know of any other situation where this has occurred where both recipients of the two miracles required for canonization worked together and were very close friends," Deacon Sullivan said.

Deacon Sullivan plans to attend the canonization on Oct. 13 and serve as deacon at the Mass of Thanksgiving at the John Lateran Basilica the following morning.