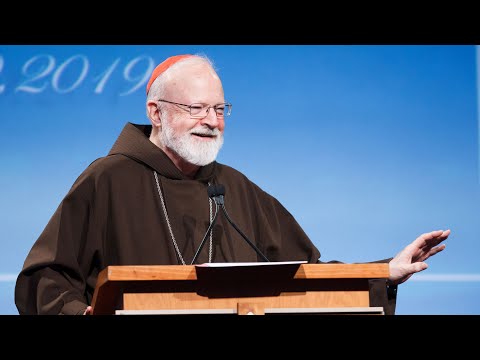 BOSTON -- About 1,500 people attended the 11th annual Celebration of the Priesthood dinner at the Seaport World Trade Center on Sept. 19, to show their support for Boston's priests and, in the process, raise $1.6 million for the Clergy Health and Retirement Trust.

Bishop Robert Reed, the president and CEO of The CatholicTV Network, served as the event's emcee.

"The enthusiasm and the energy that emanates from this room every year is just extraordinary," said Bishop Reed as he welcomed the attendees.

Father Christopher Boyle, who was ordained to the priesthood in May, gave the blessing at the start of the speaking program. He later joined his parents, dinner co-chairs Judy and Artie Boyle, on stage as they gave welcoming remarks.

"Tonight, we give back with gratitude to our priests who have taken care of us. We're promising to do this from the time they take their vows at ordination until they return home to God in glory," Judy Boyle said.

After dinner was served, a video about the different ways Boston priests help build strong communities was played. Bishop Reed then asked for applause in recognition of the communities whose stories were featured in the video: the Boston Fire Department, Pine Street Inn, Rostro de Cristo, and the Vietnamese community of St. Ambrose Parish in Dorchester.

Mayor Walsh shared remarks about how the Church shaped his life, from his time as an altar server to his participation in CYO.

"Any time we need the Church, it's there for us. But when the Church needs us, we're not always there for it," he said.

As mayor, he said, he watches the clergy "looking out for our neighbors," helping the addicted, the homeless, struggling families, and immigrants facing uncertainty.

The keynote speaker was Cardinal Seán P. O'Malley, who had just flown in from Rome. He said that he had concelebrated Mass with Pope Francis that morning.

The previous day, the cardinal said, he had spoken at a Mass for 700 American doctors gathered for a symposium in Rome. In his research to prepare his remarks to them, he said he discovered that 65 percent of hospitals and health care agencies in the developing world are run by the Catholic Church.

"Christ has given us this example of service, of compassion and of mercy. And we certainly see that reflected in the lives of our priests," Cardinal O'Malley said.

He acknowledged the late philanthropists Marshall Sloane and Don Rodman, both of whom were "longstanding supporters" of the Clergy Health and Retirement Trust.

"This world is certainly a better place because of their care and concern for others," Cardinal O'Malley said.

He went on to speak about the recently published book "The Second Mountain" by New York Times journalist David Brooks, which analyzes the "present cultural crisis."

When young people begin their careers, Cardinal O'Malley said, they identify the "mountain" they believe they need to climb in order to "establish their own identity," such as by achieving wealth, status, or power. But when they reach the summit of success, they may find it unsatisfying. Cardinal O'Malley said the world needs more people climbing the second mountain.

He told the priests present that their ministry is "to continue to make Christ's love present and visible."

"We don't always see the fruit of our work, but this evening we're blessed to recognize and celebrate the work of so many great priests who have made the lives of countless people in our archdiocese better because of their sacrifice, fortitude and love," the cardinal said.