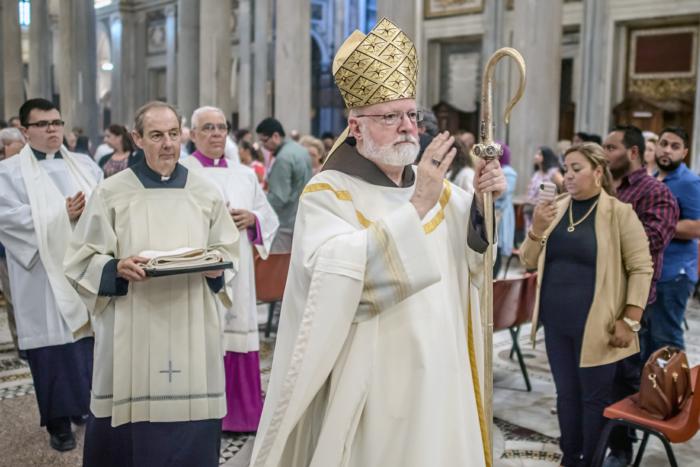 On Tuesday, Sept. 17, Cardinal O'Malley celebrated Mass for about 800 physicians and other healthcare workers at the Basilica of St. Mary Major in Rome. Pilot photo/CardinalSeansBlog.org

Much of this past week, I was in Rome for meetings of the Pontifical Commission for the Protection of Minors, as well as meetings of the Council of Cardinals advising the Holy Father on the reform of the Roman Curia.

Our meetings of the Pontifical Commission began on Thursday and, as we do each year, we began by listening to the testimony of victims of abuse. This serves to focus us on the urgency of working for safe environments and also looking for ways to be a voice for those who have been so profoundly affected by the sexual abuse of minors.

I also read to the members from the Holy Father's letter issued for the feast of St. John Vianney. It is a very beautiful letter to priests, in which he recognizes that many innocent priests have suffered because of the sexual abuse crisis, but then goes on to talk about the terrible damage that has been done to the victims and the community, as well as the Church's commitment to work for healing and to create a culture of safeguarding.

The commission is preparing several important meetings involving bishops' conferences in Eastern Europe. We are also studying different aspects of Canon Law that will impinge on safe environments.

One of the tasks of the commission is the formation of leadership, so, recently, two members of our commission addressed the gathering of all the bishops named over the last year, to impress upon them their responsibility as bishops to promote safeguarding in their dioceses. We have also continued to be involved with the ad limina visits of bishops from different nations, so that we can discuss with them the challenges and successes in implementing programs for safeguarding in their countries.

On Sunday, the final day of our meetings, I had Mass with the members of the commission in the Irish Chapel, which is in the crypt of St. Peter's Basilica very near the Tomb of St. Peter.

Dinner with Boston priests and seminarians

On Sunday night, we had dinner with the priests and seminarians of Boston who are in Rome.

Among them was our seminarian, Dennis Nakkeeran, who will soon be ordained a deacon. Father Carlos Suarez was also in town, so we were very happy to have him join us, as well.

On Tuesday, we began our meetings of the Council of Cardinals, together with the Holy Father, discussing the suggestions that have been returned from the different bishops' conferences, universities, and theologians regarding the document Praedicate Evangelium, which is the document we have been working on concerning the reform of the curia.

On Tuesday night, I had a Mass for about 800 doctors and other healthcare workers from the United States who were in Rome for a convention organized by Mario Paredes. He arranged for the conference to begin with a Mass at the Basilica of St. Mary Major.

The Basilica of St. Mary Major dates back to the fourth century. It is one of the oldest and most historic churches in Christendom, and I always like to have the opportunity to celebrate Mass there.

Mass with the Holy Father

On Thursday morning, we celebrated Mass with the Holy Father in the chapel of Casa Santa Marta; then, I headed to the airport to be back in Boston in time for our annual Celebration of the Priesthood Dinner, which was that evening.