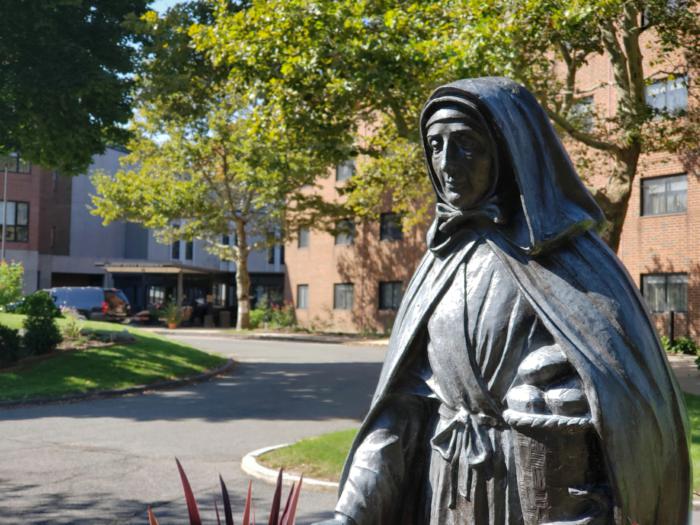 The statue of St. Jeanne Jugan, the foundress of the Little Sisters of the Poor, stands outside the Jeanne Jugan residence in Somerville. Pilot file photo/Gregory L. Tracy

SOMERVILLE -- Little Sisters of the Poor announced Sept. 16 that they will be withdrawing from Jeanne Jugan Residence, Somerville. The Sisters met with the residents, their families, lay associates, staff and volunteers sharing their decision.

The Charlestown home closed in 1896. In 1978, the residents of Roxbury and Somerville were welcomed into their new facility on Highland Avenue, behind the former building.

In making the announcement, the Little Sisters' provincial superior, Mother Alice Marie Jones, explained, "As part of a strategic plan aimed at strengthening our ministry and bolstering the quality of our religious and community life, we Little Sisters of the Poor have recognized the need to withdraw from a certain number of homes in the United States, while at the same time dedicating our resources to much needed upgrades and reconstruction projects in several others."

Cardinal Seán P. O'Malley said, "As the Little Sisters of the Poor prepare to depart the archdiocese, we express our gratitude for their 150 years of selfless dedicated service to the poor and needy elderly. The Sisters' ministry provides an extraordinary witness to the Church's teaching on the sacredness of human life, with particular attention to the senior years until the time the Lord calls a person home."

"We will miss the Sisters' presence in our local community but are encouraged to know of their strategic planning for sustaining and building up the other homes in the U.S. as they go forward with the mission established by St. Jeanne Jugan," the cardinal added.

The Little Sisters of the Poor said they are actively seeking a mission-driven sponsor to acquire the Somerville Home and continue to provide high quality compassionate care for the needy elderly women and men whom the Sisters serve. They announced that they will provide periodic updates as the transition process proceeds.

In letters to the residents and their family members, Mother Maureen Weiss, superior of Jeanne Jugan Residence, also offered the residents the possibility of moving to another home sponsored by the Little Sister of the Poor.

"Know that if you wish to go to any of our other homes so that you can continue to be part of the Little Sisters' family, you will be welcomed with open arms," Mother Maureen said.

Mother Alice Marie concluded the announcement by thanking all those who have supported Jeanne Jugan Residence and the Little Sisters of the Poor for so many years. In a special way, she thanked the Archdiocese of Boston for its leadership in promoting and supporting the mission of the Little Sisters of the Poor for the last 149 years. She assured everyone affected by this decision of the Sisters' continued prayers and support throughout the transition period.