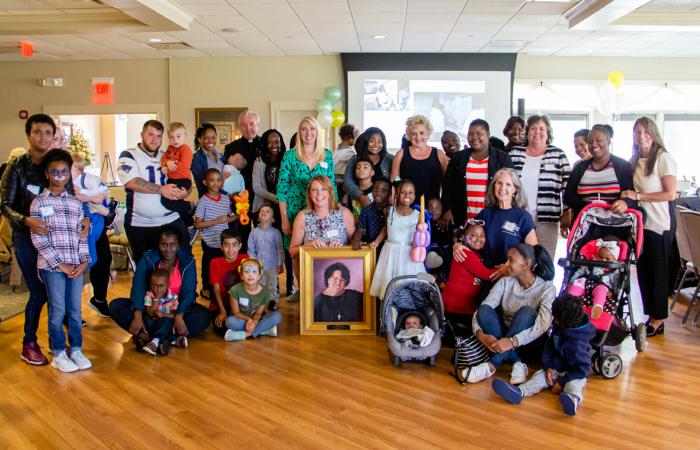 Staff and former residents of Friends of the Unborn in Quincy pose for a photo during the reception to mark the shelter's 35th anniversary Sept. 7. Pilot photo/Jacqueline Tetrault

QUINCY -- Though Hurricane Dorian had threatened to bring rain on Sept. 7, the sun broke through for Friends of the Unborn's 35th anniversary celebration.

Friends of the Unborn is a maternity home and program in Quincy where mothers can stay throughout their pregnancies and up until their children are a year old. Residents can take on-site life skills, parenting, and enrichment classes. The program provides not only shelter but also assistance in applying for housing and planning education and career advancement. Friends of the Unborn collaborates with social workers from many local and state agencies to help address residents' various needs, including legal assistance in court cases.

Dozens of employees, volunteers, and former residents came to the Sept. 7 celebration, which began with a Mass at St. John the Baptist Parish. The main celebrant was Father Michael McNamara, who serves on the Friends' board of directors. Many former residents brought their children, ranging from infants to 11 years old.

The Mass was followed by a reception at the Tirrell Room function facility. With no rain in sight, the children blew bubbles and played outdoor games on the grounds, while inside there was a photo booth, a face painting station, and balloon animals.

During the meal, Friends of the Unborn executive director Joan Bailey addressed the attendees and invited some former residents to share their stories.

Many of the speakers mentioned Marilyn Birnie, the founder of Friends of the Unborn, who died on July 13. Her husband Rod and her daughters Heidi and Rachel were present at the celebration.

"Marilyn started this dream 35 years ago, and we're still here strong because of you," Bailey told the attendees.

In 1984, Birnie was a divorced mother raising two teenage daughters in a two-family house in Hull. A television program inspired her to help pregnant women who felt that they needed abortions. She contacted the archdiocese and offered to welcome a pregnant woman into her home. Over time, she was able to take in more women and rent more living space.

Birnie spoke at churches to raise money for their care. Her daughter, Heidi Cerullo, told The Pilot that Birnie would not accept any money from the government because she wanted to be able to hold Bible studies for the women and tell them about Christ.

Bailey said that when she came to work at Friends of the Unborn, she imagined holding fundraisers, but was told that the shelter does not hold any. The organization depends entirely on private donations, trusting that God will provide what they need to continue their ministry.

In 2001, the late philanthropist Thomas Flatley purchased the current building for the Friends of the Unborn, which has classrooms, offices, conference rooms, laundry facilities, and a chapel, as well as living space for the residents. Cerullo said about 14 pregnant or parenting women can stay at one time.

"I'm hoping that we get to see you in 35 more years," Bailey told the celebration attendees.

A former resident named Susie came to the celebration with her daughter and told the attendees about her experience. She said she came out of an abusive relationship to stay at Friends of the Unborn and went to nursing school. She is now a nurse, and her daughter is 11 years old.

Susie said she was grateful to Birnie and "glad that she has all these people here to continue what she started."

Mother Olga, founder of the Daughters of Mary of Nazareth, spoke about her order's work providing spiritual support to Friends of the Unborn residents over the past four years. The Daughters keep a list of the residents' names and their babies' due dates in prayer lists next to their chapel. They teach the mothers about Theology of the Body, the dignity of women, and "the beauty of being God's child."

She said Friends of the Unborn is like a "mini parish." Some volunteers and board members have served as godparents for residents who decide to be baptized or have their children baptized.

"We often comment how courageous are those of you who come through Friends of the Unborn, whether in the past or you are still there. You really inspired us, each one of us, by your courage and your commitment to life," Mother Olga said.

Father McNamara spoke briefly before giving a closing blessing. He said the women who stay at Friends of the Unborn are invited "not just to a shelter but into a family of faith."

"It's so wonderful to hear the witnesses, to see how not just babies are born, but lives are transformed," he said.