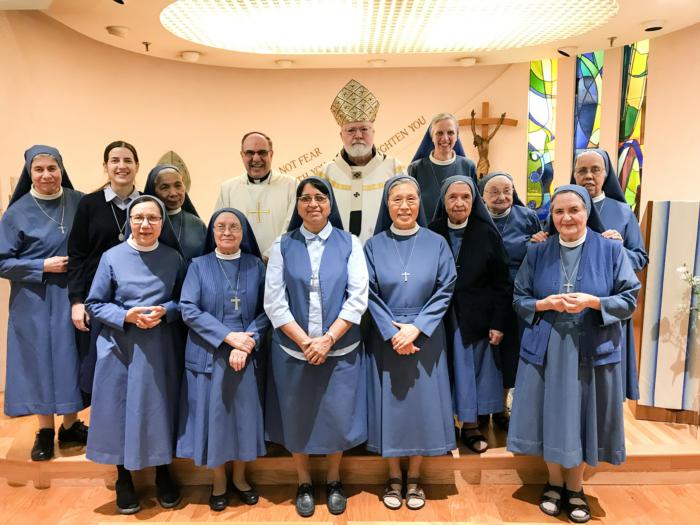 On Thursday, Aug. 15, the feast of the Assumption, Cardinal O'Malley joined the Sister Disciples of the Divine Master for a Mass and dinner to celebrate the feast day. Pilot photo/CardinalSeansBlog.org

Marking the 160th anniversary of the death of St. Jean Vianney, the patron saint of priests, the Holy Father wrote a beautiful letter to priests, reflecting on the life of the saint and the joys and challenges of priesthood. In it, he also speaks about the crisis and the suffering of so many people caused by the sexual abuse by priests.

It's a powerful letter, so I recently sent it to all the priests of the archdiocese to reflect upon, and I also want to encourage all of you to read it (w2.vatican.va/content/francesco/en/letters/2019/documents/papa-francesco_20190804_lettera-presbiteri.html).

On Thursday, I was visited by Bishop Antonisamy Francis of the Diocese of Kumbakonam, India. He has been visiting various communities of Indian Catholics and conducting mission appeals here in the United States. He has some of his priests studying in Boston, so while he was in town, he came to greet me.

He brought me the gift of a lovely shawl.

Also on Thursday, I celebrated the funeral of Father Frederick McGowan at St. James Church in Haverhill, where he had served for over 25 years in the course of his long ministry.

He was ordained in 1949 and so had been celebrating 70 years of priesthood and was one of the oldest priests in the archdiocese. In recent years, he had been a resident of Regina Cleri.

With us for the funeral was his classmate, Father Frank McGann; his sister, Dorothy; and many of his nieces and nephews. One of his nieces is from Hawaii, and there were many people who came from Hawaii to attend the funeral. They were very recognizable because they were wearing leis, which is a sign of affection and respect for the departed.

It was a very beautiful send-off for a man who had served the archdiocese.

The Little Sisters of the Poor

On Saturday, Mother Maureen and Mother Alice Marie of the Little Sisters of the Poor came to greet me.

We are so grateful for the wonderful care the Little Sisters provide for the elderly, including many of the parents of our priests, at their Jeanne Jugan Residence in Somerville.

On Sunday, the annual retreat for the bishops of the Boston Province began at the Franciscan Guest House in Kennebunkport, Maine. Unfortunately, this year I was unable to leave Boston, so I made my own private retreat.

Bishop Daniel Flores of Detroit was the retreat master for the bishops. I have heard he did a wonderful job and the bishops were all very pleased with the retreat. I was sorry I was unable to join them, but I was happy to have my private retreat, simultaneously.

Feast of the Assumption

On Thursday, was, of course, the feast of the Assumption and I joined the Sister Disciples of the Divine Master for a Mass and dinner to celebrate the feast day.

With us were Bishop Peter Uglietto and Father Bob Kickham.

Some of the sisters were celebrating the anniversary of their profession that day, so we were very happy to be with them on this beautiful Marian feast.