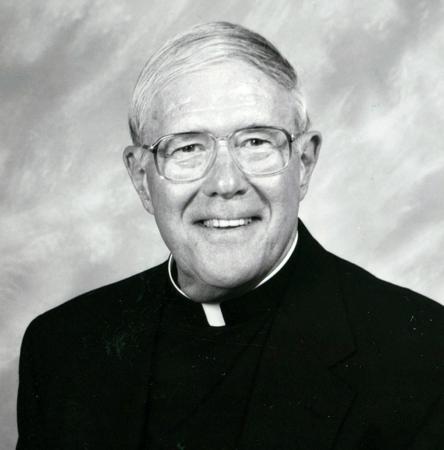 The fourth oldest priest of the archdiocese and the third remaining member of the seminary class of 1949, Father Fredrick R. McGowan died at Regina Cleri Residence on July 31, 2019 -- eight days following his 94th birthday.

Born in Boston's Hyde Park section on July 23, 1925, he was a son of the late Frederick and Maria (Dealing) McGowan. He attended the parish school at Most Precious Blood (the school was then called St. Raphael); Boston College High School when it was still in the South End; Boston College; and St. John Seminary. Archbishop Richard Cushing ordained him to the priesthood at Holy Cross Cathedral on May 4, 1949. With Father McGowan's death there are two members of the class living: Msgr. Francis J. McGann and Father Philip J. King, both at Regina Cleri.

Father McGowan's first assignment was to have been "temporary," something that was a common occurrence then. That temporary assignment as an assistant at St. Jerome Parish in Weymouth lasted seven years.

In 1956, he was assigned as an assistant at St. Mary Star of the Sea, Beverly. He remained there (his second longest assignment) for 14 years (see the end of the 42-year pastorate of Msgr. John Degan and ushering in the reign of Msgr. Francis G. Shields). He left the parish in 1970 for neighboring St. Thomas the Apostle Parish, Salem, which would be his shortest priestly assignment, a brief 15 months.

His longest assignment followed when in 1971 Archbishop Medeiros appointed him initially as an associate; and then in 1976, the cardinal named him pastor of St. James Parish, Haverhill.

The Haverhill parish had been one of the largest parishes in the archdiocese with its own elementary and high schools and with a well-deserved reputation as a hothouse of vocations to the priesthood: notably for the priesthood of the archdiocese and for the Sisters of St. Joseph, who staffed both parish schools.

During Father McGowan's total of almost 27 years at the parish, he saw many changes in the composition of the parish, from a predominantly Irish population many of whom moved to area towns or southern New Hampshire; the parish welcomed immigrants from Central America and from Vietnam.

Coincidently, his home parish in Hyde Park was undergoing similar changes in demographics with an influx of many Haitian immigrants moving into another previous Irish stronghold.

Bernard Cardinal Law granted Father McGowan senior priest/retirement status in 1997. Following his retirement, he resided in nearby Merrimac at Greenleaf Park, in 2014 he moved to Saab Residence in Lowell, and in 2016 to Regina Cleri Residence, Boston.

Cardinal Seán P. O'Malley was scheduled to be the celebrant of Father McGowan's Funeral Mass on Aug. 8 at St. James, Haverhill. Among those who were scheduled to concelebrate with the cardinal were Merrimack Regional Bishop Robert Hennessey; Father Vincent Gianni, senior priest in Methuen who was also to serve as the homilist; as well as other priests who had served with Father McGowan.