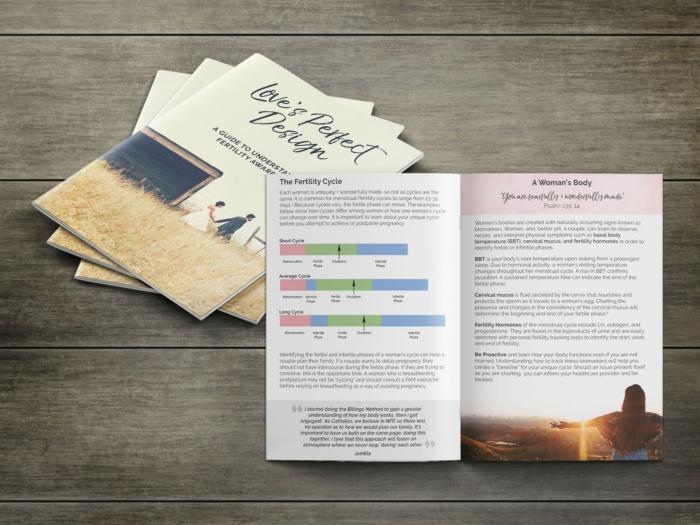 Natural Family Planning (NFP), also called Fertility Awareness Methods (FAM), can help couples achieve or postpone pregnancy by observing, recording, and interpreting symptoms of fertility -- such as temperature and hormones -- in a woman's menstrual cycle. These methods respect Church teachings on the unitive and procreative nature of sex, and have none of the side effects of artificial contraceptives.

Jacquelyn Brunache, operations associate for Ethnic Ministries at the archdiocese, calls herself an "NFP enthusiast." She first heard about it from Catholic friends but did not know what it was until she asked a friend who had recently married.

"I feel like in Catholic groups and circles those letters are shared a lot but people don't really often explain what they mean or how it works. So, it wasn't until I got engaged and then had to learn NFP for myself that I really learned more the inner workings of it," Brunache said in a July 23 interview.

In graduate school, she gave a presentation about fertility awareness for a secular audience. Recently, she gave a talk on NFP at the Pastoral Center for engaged couples.

Because there are many different methods, Brunache said, it is important to research them "to find which one works best for you" and "get a basic understanding of all of them before you decide on a method."

She also emphasized the need to work with an instructor rather than try to figure it out alone.

"You really need somebody who's trained and can kind of guide you through the process," Brunache said.

Instructors can work with individuals and couples in person or virtually. Christina Valenzuela, an NFP instructor for the Metro West area, said she favors in-person instruction because she feels it is important to establish a connection with clients. If meeting in person is not possible, she said, she defaults to virtual instruction.

Speaking to the Pilot on July 24, she noted that when reproductive biology is taught in schools, "there's a lot that's left out in that instruction, it's meant to be kind of utilitarian and it's meant to say like 'Here's what you should do, here's what you shouldn't do.' But nobody ever, in my entire life, stopped to explain to me the complexity of what was going on in my body."

Dr. Kerry Pound, a pediatrician and NFP instructor in the North Shore area, saw this lack of in-depth explanation in the medical field. When training to be a physician, she was taught to prescribe birth control for menstrual issues "after only a cursory or non-existent work-up."

"It was clear to me that we weren't fixing anything, just overriding the entire system of women's delicately balanced hormones. I thought we could offer women more. We could offer a treatment that worked cooperatively with their cycle to actually treat the underlying cause," she said in a July 22 email to the Pilot.

"Since most women are prescribed hormonal contraceptives as the default from a young age, few understand their cycles, natural signs of fertility, and how their cycles provide insight into their general health," Pound said.

She decided to be certified as a medical consultant in Natural Procreative Technology and teach Creighton Model charting because she "felt a deep desire to integrate my faith and profession more fully," Pound said. NaPro Technology can help to identify gynecological and reproductive conditions, such as endometriosis, polycystic ovaries, and progesterone/estrogen imbalance.

"As women, we've been blessed with intricate indications of our cyclical fertility and yet so few appreciate the gift and instead have adopted the cultural norm that our fertility must be suppressed," Pound said.

Brunache acknowledged that mainstream obstetrician-gynecologists do not know much about NFP.

"What I would love to see is women being educated about it," Brunache said. She added, "My big push is to let people know it's not just a Catholic thing."

Valenzuela said that, as an instructor, she must support couples whose doctors do not understand or support NFP.

"There's a lot of accompaniment that I have to do with my clients to even talk them down emotionally after a really bad visit to the doctor," Valenzuela said.

She said that NFP promoters need to consider how to reach doctors who would be friendly to them, and that doctors do not need to be Catholic to support NFP.

"There's a call that needs to be sent out to the medical community in Boston. Who is there to support us? Because not every NFP instructor is going to be a medical professional," Valenzuela said.

Christen Fitts is training to be a Creighton Model instructor through the Saint Paul VI Institute, a research and education center in the field of natural fertility regulation. Fitts is now in her first practicum, working as an intern under a supervisor who gives her feedback as she teaches women and couples.

In a July 22 interview, Fitts said she herself has used the Creighton method for 10 years, so it was not entirely new to her when she began training to become an instructor. As she learned more, though, it revealed to her "how wonderfully made both men and women are (and) how intricate women's fertility is and what a gift fertility is."

"It's compelled me to learn about 'Humanae Vitae' and has invigorated me to want to spread this to other women," she said.

Fitts said she feels a sense of "responsibility" when teaching NFP.

"As I give information to other women and couples about their cycles and about their body and about the science behind it all, I feel this responsibility to make sure that I'm really imparting everything I can to them and giving everything to the fullest, so that they are able to really make informed decisions about how to use this gift within their marriage," Fitts said.

The biggest misconception about NFP, multiple instructors told the Pilot, is that it is outdated or ineffective. According to the Journal of the American Board of Family Medicine, efficacy of FAM/NFP ranges from 97 to 99.6 percent, depending on the method.

"The challenge comes into play when people aren't following it correctly or (are) trying to do it (themselves) and not working with an instructor," Brunache said.

Unlike artificial contraceptives taken solely by women, NFP requires the cooperation of both partners.

"It's really become a woman's thing to sort of take care of this on our own, and it hasn't been a partnership thing. And that's the wonderful thing about working with Natural Family Planning methods, is that this is your team," Liz Cotrupi, director of the Family Life and Ecclesial Movements ministry of the Office of Lifelong Faith Formation, told the Pilot on July 19.

Many instructors said using NFP fosters intimacy because it requires open communication and cooperation between spouses.

"It really encourages you to talk about your intentions for your family every single day with your spouse and how you want to use this method and whether you can be open to children, open to life. And that kind of daily vulnerability opens you up to so many other areas in your marriage and really connects you with your spouse on a much deeper level. And it just really allows God to work in your marriage and for you to be able to open yourself up to that," Fitts said.

Fitts and Brunache both noted that NFP is not without challenges. When a couple is trying to avoid pregnancy, it involves abstinence during the periods of a woman's menstrual cycle when she is fertile.

"There is sacrifice involved in NFP. I never want to diminish that fact, too, that we're called to sacrifice for our spouse and for our marriage, depending on how you need to use it," Fitts said.

Brunache said that while NFP has worked well in her own marriage, she knows many couples struggle with it.

"I also don't want to paint an unrealistic expectation that it is all rainbows and butterflies. Like much of our faith, it often requires sacrifice and dying to ourselves. I think that sacrificial component is helpful in bonding the couple but I know some who feel it is a very heavy cross and difficult to carry," Brunache said.

Cotrupi's ministry has been working to form an NFP community group, where instructors and practitioners can network, talk about their experiences, and pray together. Its first meeting was held in May with about 15 attendees, including instructors, their guests, and people interested in learning about NFP. Another meeting is being planned for the fall.

As they go forward, Cotrupi told the Pilot, the meetings would focus more on strategies for promoting NFP. Their goal, she said, would be to equip people with information to share with their parishes, schools, and doctors.

"It's more than just this method, it's God's teaching, and we can't lose sight of that," Cotrupi said.