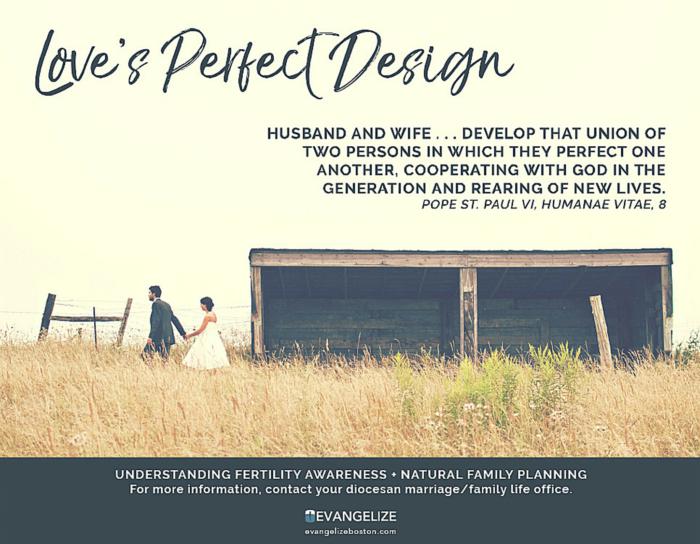 Liz Cotrupi, director of Family Life and Ecclesial Movements, said her team started planning their campaign last year, which was the 50th anniversary of the publication of "Humanae Vitae." They wanted to update older literature with new information and statistics, and redesign it to have a "more contemporary feel," she said.

They developed a new poster, a list of NFP instructors in the Boston area, and a booklet, entitled "Love's Perfect Design: A Guide to Understanding Fertility Awareness."

The booklet introduces readers to fertility awareness, different NFP methods, and the advantages of using them. The booklet is currently only available in English, but Cotrupi said it will soon be available in Spanish and they hope to translate it into other languages.

Her team sent posters in multiple languages to parishes and seminaries and hopes to send them to college campus ministers. Along with the posters, lists, and booklets, they sent letters asking pastors to make people aware that these resources are available.

The booklet has the archdiocesan logo on the back, but Cotrupi's team is making it available to dioceses across the country, who can order copies at evangelizeboston.com. They will customize orders of 1,000 or more with the other diocese's logo and phone number on the back.

Jacquelyn Brunache, operations associate for the Ethnic Ministries at the archdiocese and a self-described "NFP enthusiast," said she is "excited" about the pamphlet.

"I think it does an excellent job of providing basics for people to understand the fundamentals of how NFP actually works and a basic overview of methods. It also has a wealth of other resources to look into, such as how to find an instructor list and even support Facebook groups," she said in an email to the Pilot.

"I think it is important that priests have a basic understanding of NFP so they can help guide their parishioners and maybe even speak on it in a homily. My hope would be that each parish would be able to direct couples using or inquiring about NFP how to find an instructor, method and even connect them with other couples who are also using NFP," she added.

Dr. Kerry Pound, an NFP instructor in the North Shore area, said, "Priests need to have the courage to embrace and speak about it! If priests feel unable or unwilling, they should invite to the parish speakers who can joyfully articulate teachings of Humanae Vitae and Theology of the Body."

Christina Valenzuela, an NFP instructor for the Metro West area, said NFP is "a necessity if we're to live out this vocation (of marriage) authentically in the 21st century."

"It's important for people to learn about NFP, and to have access to classes about NFP, because we can't reasonably expect people to live out Church teaching unless this is a viable option," she said.

Valenzuela called the campaign a "top-down effort," appealing to people who "hold the power in the parishes" to promote NFP.

"It is so important for pastors, or for anybody who's going to be counseling couples, to understand what this is -- to really know what NFP is -- what the struggles are, what is required of couples, what they're asking people to do, or, by omission, what they're giving people other permission to do. It's important that they understand how this fits in with the rest of the gospel message," Valenzuela said.

She said it is also important for people who use NFP "to empower each other, to bring NFP to the forefront in our daily conversations," and to reach out and accompany each other in using it.

"The ministry of accompaniment is something that we have not really equipped laypeople to do with NFP. As an instructor, I have a very specific role and I can teach people how to do NFP, but the day-to-day walking with one another and sharing our struggles is, I think, an initiative that needs to come from the pews, from the trenches," Valenzuela said.

She said both priests and laypeople need to help promote NFP.