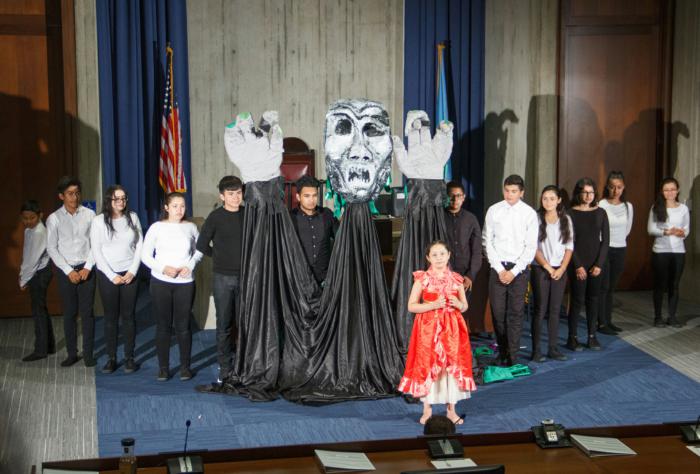 BOSTON -- On July 10, Boston City Hall hosted a performance of "The Last Dream," a play written and performed by the children of Salvadoran Temporary Protected Status (TPS) holders in collaboration with Boston Experimental Theatre.

TPS grants legal residency to immigrants from countries suffering from extreme circumstances, such as armed conflict, or natural disasters. It must be renewed periodically, and repeated extensions can make it seem permanent. Following an earthquake in El Salvador in 2001, TPS has enabled over 200,000 Salvadorans to live in the United States, where they have established careers and raised families.

In January 2018, the Trump administration announced that TPS would expire for several countries, including El Salvador, over the course of 2019. TPS holders with children born in the U.S. would have to choose between leaving them behind or bringing them to a country still suffering from high rates of poverty and violence.

Boston Experimental Theatre came into contact with several local Salvadoran TPS holders and their families in the summer of 2018. After hearing the perspectives of the children of TPS holders, many of whom are U.S. citizens, they decided to devise a play that would help people understand their families' situation and encourage support for TPS.

Many of the families are Catholic, and several cast members are active in their parishes as altar servers, choir members, and religious education assistants. In October 2018, five of the cast members traveled to the Vatican with other TPS holders' children. They met Pope Francis during one of his general audiences, told him about their situation, and asked for his support.

After months of workshops and training with Boston Experimental Theatre, the children performed "The Last Dream" for the first time at Boston University in September 2018 and then at Harvard University in November 2018. The cast went to Washington, D.C., in February 2019 to perform "The Last Dream" for the TPS People's Summit attendees as well as members of Congress and their staffs.

The July 10 performance took place in the City Council chamber, which was filled almost to capacity. Before it began, Jared Wright, who co-directed the show with Donya Pooli, addressed the attendees.

"I was born and raised in Boston, so it's very important to me that we get to share this here in City Hall, because the Boston that I know is the Boston that celebrates immigrants, a Boston that is welcoming and inviting to everyone," he said.

Wright explained that "the show that you are about to see is not just a play. These stories are their stories." He said that although he is listed as one of the writers, it was really written by the children.

"We worked with them over the course of three months to create this show together, and it is all from their ideas, from their beliefs, and from their anxieties," he said.

The play begins with 10-year-old Sophia Landaverde listening to her mother's story of growing up in El Salvador, pantomimed by other cast members.

In another scene, several teenagers, including Sophia's older sisters, prepare for Sophia's birthday party. They argue, tease, make jokes, and break into Taylor Swift lyrics. The lighthearted mood deflates when they broach the topic of their parents' TPS, anticipating an announcement that it will be cancelled.

At the end of the play, the cast members break the fourth wall, introducing themselves and briefly sharing their fears, their anger, and their shifting priorities in the face of such unfairness and uncertainty.

Left alone on the stage, Sophia cries out for her mother to help her. When she receives no answer, she looks out at the audience and asks, "Will you help me?"

One audience member in the City Council chamber answered, "Yes!"

After the performance, cast members Jacqueline Landaverde, 18, and Kevin Palma, 18, addressed the attendees about the TPS Alliance's goals. Both are the eldest of four siblings and are unsure whether they will go to college in the coming academic year.

The National TPS Alliance has filed a lawsuit, Ramos v. Nielsen, against the cancellation of TPS for people from El Salvador, Haiti, Nicaragua, and Sudan. In October 2018, a U.S. District Court judge issued a ruling to temporarily block the cancellation. TPS holders' status will be protected until Jan. 2, 2020. There will be a court hearing on Aug. 14, at which time they expect to find out whether TPS will be cancelled or extended.

"It's very scary for us to know that this is what our future is holding for us, and that future's not that far away," Jacqueline Landaverde said.

Kevin Palma said that their goal is first to win the lawsuit, and then to find a way to give TPS holders permanent residency so they can remain in the U.S. legally.

"We really depend on this lawsuit for our family to continue remaining in this country. Without that lawsuit, we would have been deported by now," he said.

Speaking to the Pilot after the show, Wright said he wants "to bring this story to hearts and minds, so it's not just some news thing that's happening, but so it is real and present to them."

He said people can help TPS holders by supporting the Massachusetts TPS Committee (or Comite TPS), part of the National TPS Alliance, through funding and participation in events. The organization will be celebrating the second year of its existence in August.

"We don't need to wait anymore for someone to give us permission to stick up for families and for the lives of children. We need to do. There's no more waiting," Wright said.

The cast and creative team stayed as the City Council meeting began. Councilor Josh Zakim introduced them and spoke about the work the council has done on issues of immigration.

He said to the cast, "Thank you for being such leaders. I can only say I apologize for the fact that you need to be."