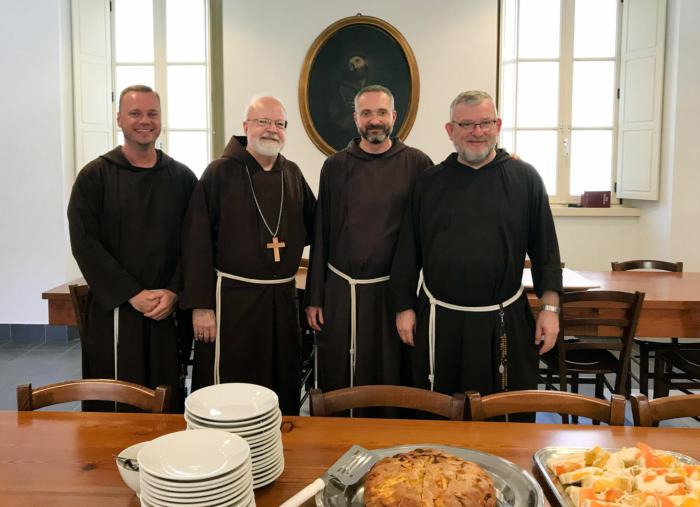 This year, Cardinal O'Malley celebrated his birthday in Rome, where he had lunch with the Capuchin community and a meeting with the Holy Father. Pilot photo/CardinalSeansBlog.org

Regular readers will remember that, as I concluded my last post, I was in Rome for a meeting of the Council of Cardinals, and it was the eve of the feast of Sts. Peter and Paul, the patronal feast of the city.

Before I move on to the events of this week, I want to share with you some of the things that took place in Rome around that feast. It is a very grand celebration, which also happens to coincide with my birthday. (So, I always tell people the fireworks in Rome are in honor of my birthday -- but nobody believes me!)

For the feast, there is a wonderful tradition in Rome of decorating the streets in front of St. Peter's Basilica with images made of flowers and colored sawdust.

Another wonderful tradition for the feast of St. Peter is that the new archbishops that have been named during the course of the year gather in Rome to receive the pallium from the Holy Father.

The pallium is a white band with black crosses worn around the shoulders and is the symbol of an archbishop. It represents the lamb that the Good Shepherd carries on his shoulders, and the black part of the bottom is the hoof of the lamb.

It is created from the wool of lambs raised by Trappist monks and is placed near the tomb of St. Peter before it is presented to the archbishop by the Holy Father.

There were about 30 archbishops from around the world who received the pallium this year. A couple of them were Capuchin confreres whom I knew and there were two from the United States -- Archbishop Byrnes from Guam and Archbishop Wilton Gregory from Washington, D.C.

So, the American Embassy to the Holy See had a lovely reception for the Americans in Rome in honor of the new archbishops.

It was held at the ambassador's residence, known as the Villa Richardson.

With us for the Pallium Mass was Orthodox Archbishop Job of Telmessos, who was heading the delegation representing Ecumenical Patriarch Bartholomew of Constantinople. Archbishop Job is the Patriarchate's representative to the World Council of Churches at Geneva and is a good friend of Metropolitan Methodios of Boston.

It has been the tradition -- for many years now -- that the Ecumenical Patriarch sends representatives for the feast of Sts. Peter and Paul and the Holy Father does the same for the feast of St. Andrew, the patronal feast of Constantinople, in November.

Mirroring this tradition, here in Boston we also exchange delegations between the Greek Orthodox Metropolis of Boston and the archdiocese on the feasts of St. Peter and St. Andrew. So, that same day in Boston, we were very happy to welcome Father Demetrios Tonias, the dean of Annunciation Greek Orthodox Cathedral for the Mass at the Pastoral Center celebrated by Bishop Arthur Kennedy.

Lunch with the Capuchin community

As I mentioned, the feast coincides with my birthday. So, that afternoon, I had lunch with the Capuchin community in Rome, where there were four of us who were celebrating either birthdays or name days.

I also had a meeting with the Holy Father at which I presented him my letter of resignation, which is the custom for residential bishops when they reach the age of 75. The Holy Father did not accept it but instead asked me to stay on for a few more years in Boston. As long as my health is good, I am very happy to serve in any way that I can.

Then, that evening, I had dinner with the Boston priests who are in Rome.