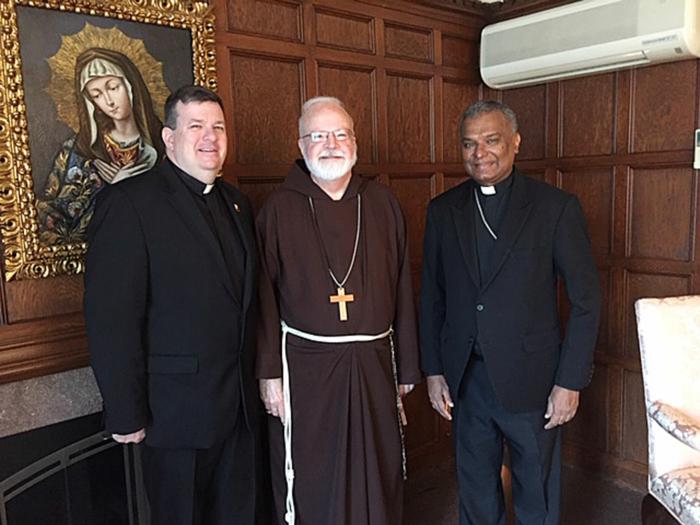 Last Saturday, I had the joy of ordaining a new Capuchin priest, Brother Akolla, at St. Catherine of Sweden Church in Pittsburgh. He is a member of the Cameroonian community, so we were joined by a large number of his Cameroonian relatives and friends for the celebration.

I belong to the Pittsburgh Province, and it is always a joy when I can spend the day with our friars -- especially around something as joyful as a profession or ordination.

By Sunday, which was, of course, Father's Day, I was back in Boston and we had a Mass for the Hispanic community in the cathedral, during which we had a special blessing for all the fathers and grandfathers present.

Then, in the afternoon, I attended the 10th Annual Gala Dinner to benefit the Redemptoris Mater Archdiocesan Missionary Seminary of Boston.

We were pleased to be joined by our keynote speaker, Eduardo Verastegui. I have been inviting him for a long time to come to Boston -- and it was wonderful that he was able to make it on this occasion.

He gave just an extraordinary testimony about his own conversion and his commitment to working for evangelization and the Gospel of Life in Hollywood, where so many values that are in conflict with our faith are prevalent. There, in the midst of an extremely secular and often interreligious atmosphere, he maintains a sense of mission and the presence of God in his life, which makes him ready to risk his economic well-being and his career to be faithful to his vocation as a Catholic.

He also talked about making the movie "Bella." He said that, after it was released, they received over a thousand letters from women who saw the movie and had been considering abortion, but after seeing the film, were convinced that was not the path they wanted to take.

Eduardo galvanized such a reaction from the crowd -- it was just stunning. As I told the seminarians afterward, usually the songs they sing at the end of the evening are the highlight, but they were completely eclipsed by the speaker this year. The undisputed highlight of the evening was the very moving testimony of the faith of this young soap opera star-turned apostle.

On Monday, I was visited by Bishop Raymond Wickramasinghe of the Diocese of Galle, Sri Lanka, who came to the cathedral accompanied by Father Marc Bishop. He was staying with Father Bishop because he was preaching for the Mission Appeal in his parish.

He brought me the gift of a statue of a spear fisherman.

We had a very nice visit. During our discussion, he spoke about the terrible bombings that took place on Easter in his country, and he described the atmosphere of fear and intimidation that exists there. However, it was encouraging to hear that, after the terrible bombings, the Buddhist community reached out to them offering help, which was very consoling for Bishop Raymond and his people because they had never had that close relationship with the other religious communities.

Then, I went to the Boston College Club in Boston to attend the annual lunch for senior priests of the Archdiocese of Boston, sponsored by the Order of Malta. Once again this year, we were entertained by Dick Flavin, who was just extraordinary, reciting his poetry and telling stories about Fenway and the Red Sox. He is quite the raconteur. I know all the priests there had a wonderful time. Of course, the view of the Boston skyline from the Boston College Club is just stunning -- and makes it a wonderful venue for this gathering.

We are grateful to the Order of Malta, particularly Jack Joyce and Jim O'Connor, as well as the Boston College Club, for their efforts in supporting this special event.