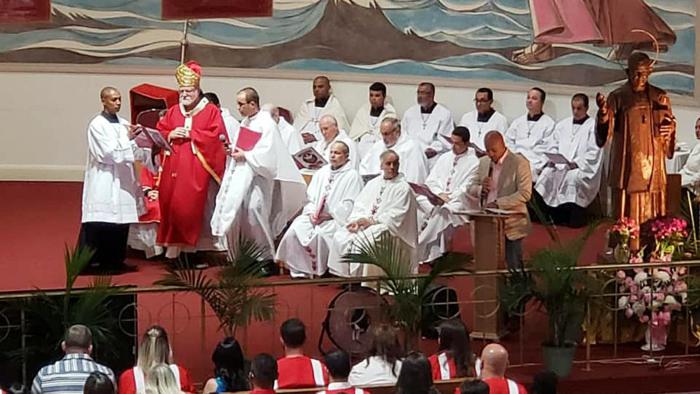 Last Saturday, we had the joy of ordaining seven transitional deacons at the Cathedral the Holy Cross. These are men who, next year, will be ordained priests. It is always a happy moment for the Church to be ordaining men to ministry.

I was struck that the number of those being ordained was seven, which was the number of the original deacons in the Acts of the Apostles. In my homily, I teased them a little bit about that, saying that there are many things that come in sets of seven -- the Seven Wonders of the World, the Magnificent Seven and, of course, the Seven Dwarfs -- but, most importantly, there are the seven deacons in the Acts of the Apostles, who were ordained to carry on the ministry of mercy and to work to heal divisions in the community. These are still very important functions of our deacons today.

Of course, the diaconate represents the servanthood of Jesus Christ, which is manifested in this ministry. The Church has the tradition of ordaining men as deacons before they are ordained priests, but they will always be ordained into this ministry of servanthood, which will continue in their priesthood.

The word deacon means "servant" and Jesus said he came to serve, not to be served. He is calling us to follow the example that he gave us at the first Eucharist -- The Last Supper -- in which he washed the feet of the disciples and told us that he was doing this to give us an example of fraternal love and service to one another.

On Pentecost Sunday, I went to the Madonna Queen Shrine in East Boston to celebrate confirmations for the Brazilian community. It was a very large group of about 150 confirmands.

The Mass was also an opportunity for us to welcome the two new Don Orione Fathers who have arrived to minister at the shrine -- Father Antonio, a Brazilian priest who was previously working in the Philippines, and Father Angel, who is a Spanish priest and is now stationed at the shrine with responsibility for the Spanish-speaking community.

On Monday, we began our annual Spring Meeting of the U.S. Conference of Catholic Bishops.

One such meeting that I attended was a meeting of the board of directors of the National Catholic Bioethics Center on Monday. The NCBC actually began in Boston and is a national center that has been invaluable in the life of the Church, particularly around questions of medical ethics.

The founder and first director of the center, Dr. John Haas, is finishing up his long tenure there. So, this was his last meeting as president.

He has given just extraordinary service to the Church in this area that is becoming more and more complex and more and more important in the life of the Church. It was an opportunity for the bishops and the others present to express our heartfelt thanks to Dr. Haas for his tireless work. He has served the Church in so many different ways.

At the meeting, we were also introduced to the new president, Dr. Joseph Meaney, who had previously served as director of International Outreach and Expansion for Human Life International. We were very pleased to welcome him.

U.S. Bishops' Committee for the Church in Africa

That day, we also had a meeting of the U.S. Bishops' Committee for the Church in Africa. This committee was founded thanks to the efforts of Bishop John Ricard, who is a Josephite. Because of his work on the board of Catholic Relief Services, he became acquainted with the tremendous growth and also the great economic challenges that the Church faces in Africa.