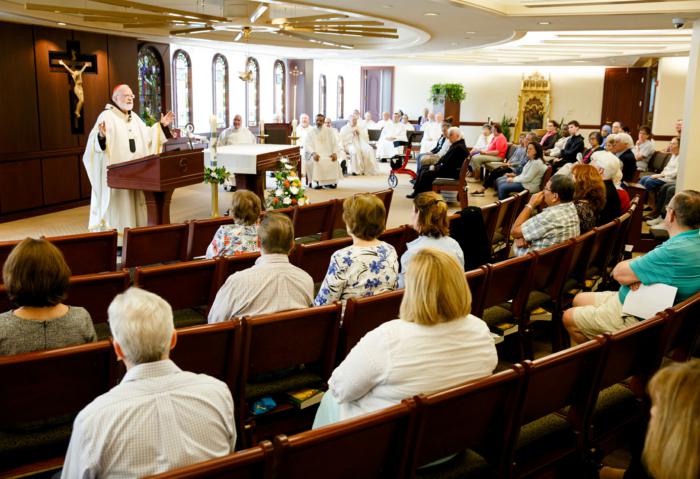 On Wednesday, June 5, there was a special Mass and luncheon at the Pastoral Center in Braintree, honoring priests and brothers in the archdiocese celebrating significant jubilees. Pilot photo/Gregory L. Tracy

Of course, this is the time of year when many confirmations are celebrated and, over the weekend, I had the joy of celebrating three confirmation Masses at parishes in the archdiocese.

Though receiving confirmation is always a special event in the life of a young person, I thought it was particularly nice that these celebrations were held during the Pentecost Novena. It is the time when the Early Church was gathered in intense prayer, waiting for the coming of the gifts of the Spirit that transformed the community on Pentecost.

I am always happy for these opportunities to be able to speak to our young people about their faith, the need to be part of a worshiping community, and to prepare for one's vocation in life.

This was the first of two celebrations of confirmation for the Brazilian community that I will hold this year. In the past, we would often hold them all together at the cathedral, but the numbers have become so large that we have decided to split them into two celebrations. So, next weekend, I will have another celebration for the community at the Madonna Queen Shrine in East Boston.

Then, on Sunday, I had two confirmation celebrations of at Our Lady of the Assumption in Marshfield, one at 1:00 in the afternoon, and another at 4:00. Concelebrating with us was the new administrator, Father Mark Derrane, and Father Joe Hennessey. In fact, Father Mark had just arrived in the parish the day before, so the celebration was an opportunity for him to introduce himself to the parish even as he was welcoming me.

On Tuesday, we celebrated a special Mass for jubilarian priests at Regina Cleri. Each year, we invite all the priests who are celebrating their 50th anniversary, whether they are diocesan or religious, to join the residents of Regina Cleri for this Mass and a lunch afterward.

It was a wonderful celebration, and we are all looking forward to the upcoming rededication of the chapel at Regina Cleri, which we hope will be ready by August.

On Wednesday, we had a special Mass and luncheon at the Pastoral Center, honoring priests and brothers in the archdiocese celebrating significant jubilees.

Brother Leonard said that he was with me 10 years ago when he was celebrating his Golden Jubilee, so I told him that I expect him to come back in 10 years for his 70th!

Following the Mass, we had a luncheon for jubilarians and their families.

That afternoon, I met with Father Matt Malone, SJ, the editor of America Magazine, who stopped by to say hello.

During our conversation, he told me that in the lobby of America Magazine there is a portrait of Cardinal Cushing because he paid for their original house in New York. I had no idea that was the case, and shared with him that a few years ago I was invited down to Washington for the 50th anniversary of the Center for Applied Research in the Apostolate, or CARA. At first, I wondered why they were inviting me, and it turned out it was because Cardinal Cushing helped them, too!