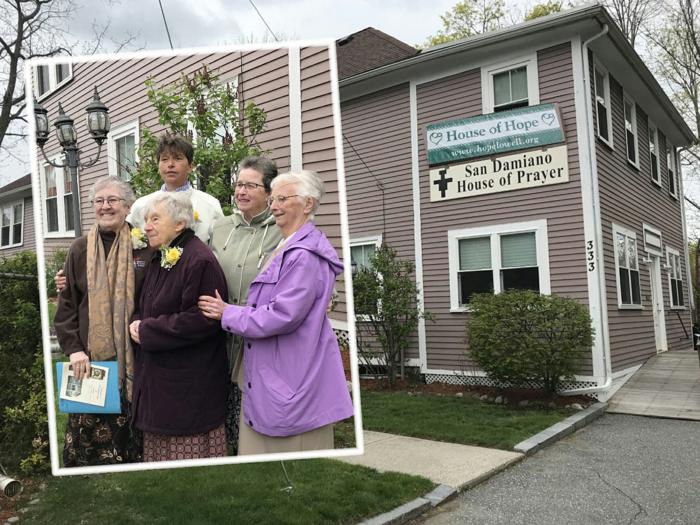 LOWELL ? The Sisters of St. Francis of Assisi held a celebration on April 28 to mark the retirement of two sisters and the end of 19 years of ministry through the San Damiano House of Prayer in Lowell.

Sister Linda Greenwood, OSF, and Sister Kenan "Kay" Rebholz, OSF, are retiring and will return to the Sisters of St. Francis of Assisi's mother house in Milwaukee, Wisconsin. The San Damiano House of Prayer is being sold to House of Hope, a nonprofit charity that provides shelter and advocacy for homeless families.

"I knew I would eventually be retiring and moving out of here," Sister Linda told the Pilot in a May 10 interview.

She said that while working in religious education, she noticed that other faith formators "wanted to learn more about their faith and have experiences of faith." She tried to meet that need by providing retreat days at her order's house of prayer in Milwaukee. When she moved back to her native Lowell 35 years ago, she longed to establish another prayer house.

Sister Linda and Sister Kenan opened the San Damiano House of Prayer in 2000. They offered spiritual direction, held retreats for parish councils, and directed people who came to stay at the house's hermitage wing. In 2006, they started their first spiritual direction training program. Over the next 10 years, they certified 129 spiritual directors from Massachusetts, Rhode Island, Connecticut, and Maine.

"That probably was my greatest legacy here," Sister Linda said.

"We've tried to create the best of Church, and I believe we've done it," she said.

Sister Linda said she and Sister Kenan will move out of the San Damiano house at the end of July. House of Hope will move in at the end of August. The Sisters of St. Francis of Assisi's lay associates will continue meeting at the house, and the spiritual direction training program will continue at Merrimack College and St. Anthony's Shrine in Boston.

"So much has been accomplished that now unfolds into a new reality for OSF Associates and Companions who will continue to meet in the new House of Hope to carry on the ministry established by the sisters," Elaine Lareau, an OSF associate and the reporter for the San Damiano House of Prayer, said in an article she wrote for the order's monthly newsletter.

Over 200 guests attended the celebration on April 28. Among the guests were Sister Sylvia Sheldon of the OSF Administrative Team and House of Hope founder Sister Jeanne Poor, SGM.

Father Paul Ritt and Father Norm Comtois, OMI, concelebrated the Mass. Father Ritt had served as a spiritual guide and Mass celebrant for the spiritual direction training program, and Father Comtois had provided days of prayer and retreats at the house.

"So many thoughts and feelings of gratitude were wrapped in this symbolic exchange, marking a new beginning," Lareau said in her article.

Sister Linda said that at the celebration, a group of last year's graduates from the spiritual direction training program gave her a cross with the inscription, "San Damiano was the best of Church."

Lareau said they are "grateful to the organizers of the celebration, Joyce Wholey and Amy Hunter, who skillfully directed the events of the day with such ease and grace."

"It was a bittersweet day. We will all miss the presence of San Damiano House of Prayer and what the Franciscan Sisters were able to accomplish in the almost 20 years of service for people of all walks of life, especially the Franciscan Associates and Companions," OSF associate Jacqueline Hebert said in an email to the Pilot.

"I leave with a joyful heart," Sister Linda said, knowing the training program she started will continue.