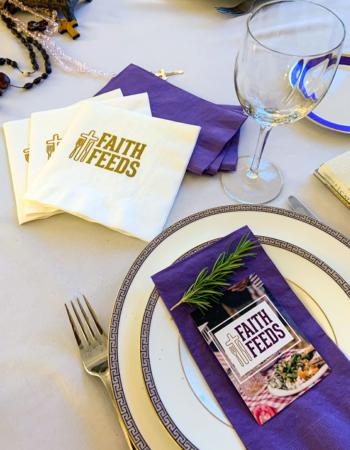 Faith Feeds, a program developed by Boston College's Church in the 21st Century Center that encourages small group sharing over a meal or refreshments, is being made available to parishes through the center's website. Pilot photo/courtesy Boston College

CHESTNUT HILL -- What happens when a small group of strangers gather to talk about faith? The Church in the 21st Century Center (C21 Center) has been learning the answer over the past year and is now launching an initiative to enable parishioners to find out for themselves.

The new parishioner-led program Faith Feeds was adapted from Agape Latte, one of the C21 Center's most popular events in the Boston College community. At the monthly Agape Latte, students gather at a coffee bar and hear a member of the faculty or staff share a story about their spiritual life.

"It's really fun to have the opportunity to create a program that gets young people talking about God through story," C21 Center director Karen Kiefer told the Pilot on May 9.

According to the C21 Center, more than 10,000 BC students have attended Agape Latte since its launch in 2006. Agape Latte is now held at 55 colleges and high schools in the United States.

Kiefer said the idea for Faith Feeds developed from her desire to give parishioners an opportunity to form community, which can be difficult for people who go to Mass but are not involved with religious education or adult-faith formation.

In November 2018, around the beginning of Advent, the C21 Center began a series of "C21 Suppers." Eight to 10 participants -- not all of them BC students -- were randomly selected from a pool of people who signed up through social media. The ones selected came together to share a meal and have a conversation about faith. During Advent, the designated topics were mostly related to the liturgical season.

Kiefer said she was "stunned" that "we could sit together at six o'clock at night, and by eight o'clock you felt like you were fast friends."

The participants opened up about their lives, sharing news of medical diagnoses and spiritual struggles. The meal was a one-time event, but afterwards they kept in touch through email, checking on each other and sharing prayer requests.

"I was really taken with the power of small group gathering," Kiefer said.

She thought about how to bring this success to other communities. As a religious education teacher, Kiefer said, she knew how parish staff can be overburdened, so she wanted to develop something parishioners could lead. She also knew it can be difficult for people to commit to frequent meetings, such as book clubs, and that it helps to have a facilitator to keep the conversation going.

To create Faith Feeds, the C21 Center put together step-by-step instructions for how parishioners can organize a meal and facilitate a discussion. These guides can be downloaded free of charge from the center's website, www.bc.edu/church21. A Faith Feeds can consist of a potluck meal or just coffee, and can be held or attended just once. Articles from the C21 Center's semiannual magazine can be used as starting points for conversations about particular topics.

Michael Serazio, a Boston College communications professor and a member of the C21 Center's advisory board, hosted a Faith Feeds dinner for students on April 2.

"I was really excited to be able to pilot a version of this as we start to roll the program out," he said, speaking to the Pilot on May 10.

He hosted the dinner in St. Mary's Hall, serving pizza, salad, and soda. The students chosen to attend were not all acquainted with Serazio or each other -- coming from different years, majors, and geographical areas. The theme of the conversation, guided by materials provided by the C21 Center, was "friendship." Serazio said it was "really a terrific experience."

He said he feels that providing opportunities for people "to connect socially and spiritually" is "vital for the growth and renewal of the Church."

"The fact that we were able to bring together a group of quasi-strangers and have a really genuine and authentic discussion about friendship and how that connects to our spiritual experiences with God, I think was really a testament to the potential of the program," Serazio said.

The C21 Center will provide materials to individuals who want to host a Faith Feeds, such as napkins and a downloadable guide. Kiefer said the C21 Center will eventually get feedback from participants, and that they want to find a way to acknowledge hosts.

"We're excited about the potential and the possibility of this program," Kiefer said, adding that "it doesn't require a huge commitment from anyone, and yet the rewards are priceless."