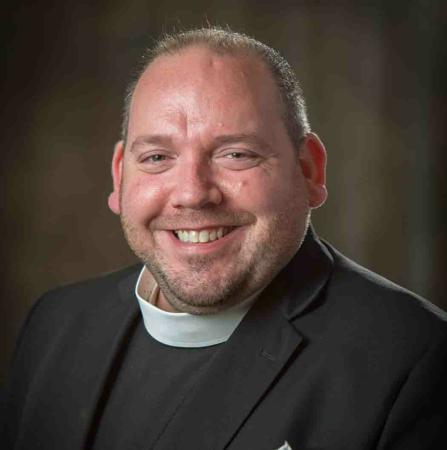 [This is the thirteenth in a series of articles profiling each of the 13 men who will be ordained to the priesthood on May 18.]

WESTON -- Deacon Corey Bassett-Tirrell got to know the Catholic Church through his work as an organist. He had grown up in a Protestant family on Cape Cod and moved to Boston in 1995. He worked in the funeral business on and off for a decade while also working as a musician.

"I read this book and thought, 'Where have you been all my life?'" Deacon Bassett-Tirrell said.

He began to seek other works written by Cardinal Ratzinger, who "has been a spiritual father to me and a great influence on me just by his gentle example and his supremely beautiful and clear writing. That, for me, has been a great source of spiritual nutrition and joy."

He said he made the decision to become Catholic when, for the first of two times in his life, "This voice came into my head and said, 'Do this now. Do it now.'"

When Deacon Bassett-Tirrell told the priest he was working for that he wanted to join the Catholic Church, the priest responded, "It's about time."

He did not go through a traditional RCIA program because he had already worked in the Church for so long. In 2005, he made his profession and First Communion at the Carmelite Chapel at the Northshore Mall in Peabody, and shortly afterward he was confirmed. Deacon Bassett-Tirrell said that when Cardinal Ratzinger was elected pope that year, he considered it a sign that he had made the right decision.

For some time, he worked as the music director of St. Adelaide Parish in Peabody. He said Father David Lewis and Father Raymond Van De Moortell were a major source of support and prayer for him there.

In 2014, he was asked at a staff meeting if he knew of anyone who would be interested in going on a vocation retreat. He said he recognized that the question was really about himself.

He went on the retreat and found it to be "a profoundly enriching experience." It ended with Mass in the chapel at St. John's Seminary. During the offertory, a hymn by John Henry Newman, "Firmly I Believe and Truly," was played.

Deacon Bassett-Tirrell said that, as a musician, he has a sense of tunes and he had never heard this one, though he was familiar with the text. And for the second time in his life, he seemed to hear someone say, "Do it now."

After the Mass, he talked to Father Daniel Hennessey, head of the Vocations Office of the archdiocese. Things happened quickly after that, Deacon Bassett-Tirrell said. He entered Pope St. John XXIII National Seminary in August 2014.

He called John XXIII Seminary "one of the great unsung heroes of the archdiocese."

"It's a wonderful testament that it doesn't matter where you are in life, you can answer God's call," he said.

Deacon Bassett-Tirrell said he still marvels at the fact that he is preparing for the priesthood.

"It's a great testament to the words of St. Paul when he said, 'Glory to God whose power working in us can do infinitely more than we can ask for or imagine.' That comes to my mind constantly," he said.