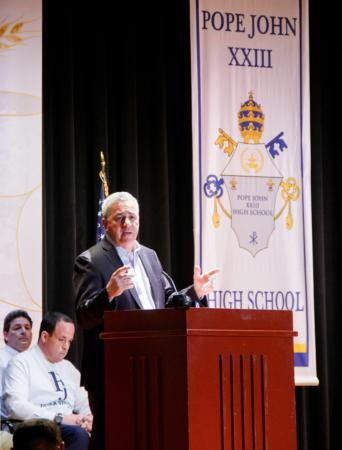 EVERETT -- Students, their parents, and alumni of Pope John XXIII High School rallied April 29 at the school to learn more details about the school's potential closure and to try to prevent that from happening.

A week earlier, Headmaster Carl DiMaiti sent a letter to students' parents, dated April 23, to explain the school's current financial situation, which has forced the board to consider closure.

In the letter, DiMaiti explained that the school ended up in this situation due to "the deterioration in the financial condition" of International Residence Management, formerly known as the United Schools Association. IRM failed to maintain its agreement with the school, resulting in a $1 million shortfall.

"Many avenues were investigated to allow the school to remain financially viable and continue to provide an affordable Catholic education to children from Everett and surrounding communities. The board has determined that the school is simply not in a position at this time to make up the shortfall in revenue caused by IRM's default. We would need to raise funds in the millions to contemplate opening the school for the 2019/2020 academic year," DiMaiti said in the letter.

He said the school would complete the academic year and determine by May 23 whether it could open in the fall.

"This news is not a reflection on the Pope John XXIII community. It is unfortunately the result of a company not keeping its agreement," DiMaiti said in the letter.

DiMaiti said the archdiocese's Catholic Schools Office is helping to form a plan, ensuring that students will be able to continue their education in Catholic schools. He also said employment counseling will be provided to the school's employees, and Catholic schools with open positions will be asked to interview Pope John XXIII faculty and staff first.

Following this announcement, the school launched a fundraising campaign through social media, using the hashtag #NotDeadYet. The Facebook page for the fundraiser said that if $50,000 could be raised, a "generous parent in our community" would match that with a $50,000 gift. At time of printing, the #NotDeadYet Donor Challenge had raised $35,330 from 326 people in eight days.

Speaking to the Pilot prior to the April 29 alumni rally, DiMaiti, who has worked at Pope John XXIII for three years, said he comes with "optimism tinged with reality."

"I've worked in other Catholic schools, and remarkably, I have seen alums step up, so in my experience I've seen this work," DiMaiti told the Pilot.

Representative McGonagle said he, his sisters, and many of his cousins graduated from Pope John. He said that the first thing he planned to do the following day was to send a letter to Attorney General Maura Healey to start a lawsuit against United Schools Association.

City Councilor Michael McLaughlin spoke of the fact that the school has been operating for over 50 years.

City Councilor Fred Capone encouraged everyone to "reach out" to anyone who cares about Catholic education.

"All donations, large and small, are needed. Small donations go just as far. If each of us reach out to everyone we know and ask them to help, we're going to meet that goal," Capone said.

After the speaking program, the floor was opened for questions from attendees. Afterwards, pizza was served in the gymnasium across the hall from the auditorium.

A sophomore student told the Pilot that despite the possibility of Pope John closing, she was "very happy to know that there are other Catholic schools from the archdiocese that will be welcoming us with open arms."

"I'm very appreciative that the archdiocese has so many other Catholic schools out there that really love the children and want the best for us as well. I'm sad that I would have to leave Pope John, but I'm very glad that I can go to another school and be reminded of how great Pope John was to me," she said.

Questions about Pope John XXIII High School's fundraising efforts may be directed to Kelley Mulvihill, director of advancement (kmulvihill@popejohnhs.org), or Paul Sobolewski, athletic director (psobolewski@popejohnhs.org), or by calling PJHS at 617-389-0240. Donation information and campaign updates can be found at popejohnhs.org/NotDeadYet.