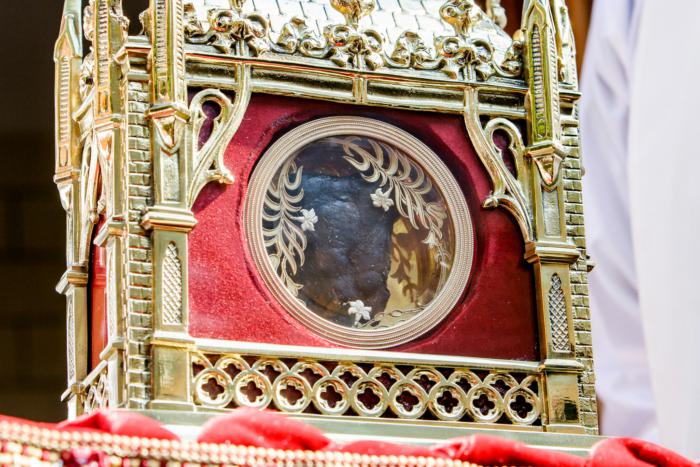 The relic of the incorrupt heart of St. John Vianney, the patron saint of parish priests, is seen before a procession at St. John's Seminary during its October 2006 visit to the archdiocese. Pilot file photo/Gregory L. Tracy

BRAINTREE -- The relic of the incorrupt heart of St. John Vianney will be brought to four locations in the archdiocese during the week following Divine Mercy Sunday, as part of its U.S. tour sponsored by the Knights of Columbus.

St. John Vianney was born in Lyons, France, in 1786. He had great difficulty with studies but, after many years of perseverance, was eventually ordained to the priesthood and was made a parish priest in the village of Ars, nearby Lyon. There, he became known for his preaching and personal sanctity but -- most especially -- for his skill as a confessor. As the fame of the "Cure d'Ars" (the parish priest of Ars) spread, people would come to travel great distances to receive his spiritual counsel. In his later years, he would spend 16 to 18 hours a day hearing confessions.

The relic of the saint's incorrupt heart was last in the archdiocese in October 2006, when thousands came out to venerate it.

Father Paul Soper, the archdiocese's secretary for evangelization and discipleship, spoke with the Pilot on April 18 about the upcoming visits, which will take place from April 30 to May 2.

The relic will first be available for veneration April 30 from 3 p.m. to 10 p.m. at the Cathedral of the Holy Cross in Boston. Auxiliary Bishop Peter Uglietto is to offer Mass in the presence of the relic at 7 p.m.

On May 1, the relic will be at the Archdiocesan Pastoral Center in Braintree, where it will be available for veneration from 8 a.m. to 3 p.m.

"A big part of what we try to do at the Pastoral Center is work towards the support of the priests of the Archdiocese of Boston, and that's relevant here, especially because John Vianney is the patron saint of diocesan priests," Father Soper said.

In the evening of May 1, the relic will be brought to the St. John Paul II Shrine of Divine Mercy in Salem from 6 p.m. to 10 p.m.

"This is a fairly new outreach program of ours in Salem. We're very intent upon having a good presence in Salem and we have sort of a dual presence there" through the new Mary Queen of the Apostles Parish and the Shrine of Divine Mercy, Father Soper said.

"Week by week, more and more people are starting to come to the shrine for the Divine Mercy devotions, and one of the nice things about this is this will be the Wednesday right after Divine Mercy Sunday, so that's the big sort of moment in the life of that shrine," Father Soper said.

On May 2, the relic will be at Blessed Sacrament Church in Walpole from 9 a.m. to 6 p.m. Bishop Robert Reed, the pastor of Blessed Sacrament Parish and president of the CatholicTV Network, will celebrate Mass there at 8:30 a.m.

Because St. John Vianney was famous for hearing confessions, the sacrament of reconciliation will be offered at each location during the hours of veneration.

Father Soper said he did not know how many people might come, but he recalled that when the heart of St. Padre Pio was brought to the archdiocese in 2016, about 20,000 people came to venerate the relic, which "took us totally by surprise."

He said he hopes "that people who come to venerate the relic will come away invigorated for parish life."

"It reminds us that the Church, while under attack in so many places in the world and in our society, that the Church has a very strong reason to be here, that we are possessors of something extraordinarily precious, that is our faith in Jesus Christ, our trust in him and the sacraments. And it can help to bolster our sense of ourselves as Catholics going forward," Father Soper said.