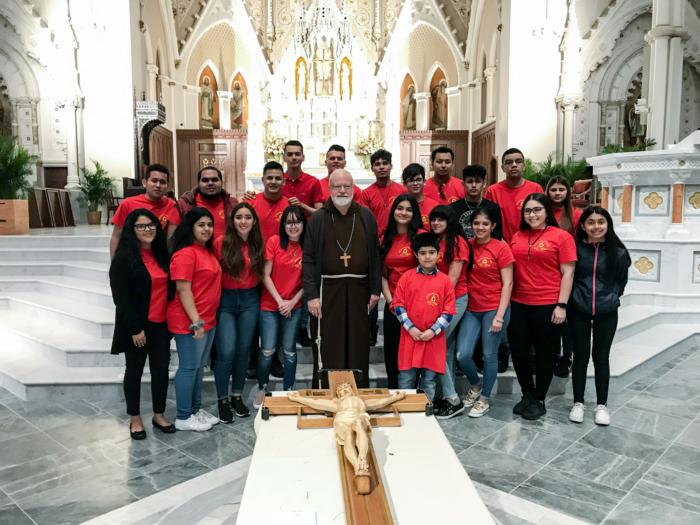 On Palm Sunday, Cardinal O'Malley met with youth groups from several Hispanic communities, who visited the newly renovated cathedral and venerated the relic of the Holy Cross. Pilot photo/CardinalSeansBlog.org

As I do each year for Holy Week, I am posting my blog a bit earlier than usual to leave myself free to participate in the events and liturgies of the Paschal Triduum.

I want to begin this week by noting, even as we were celebrating the dedication of our newly renovated Cathedral of the Holy Cross, how saddened we were to learn about the devastating fire at the Cathedral of Notre Dame of Paris -- one of the most important churches of Christendom.

I have visited Notre Dame on a number of occasions. One of the most memorable was the beatification of Frederic Ozanam, the founder of the St. Vincent de Paul Society by Pope St. John Paul II during World Youth Day in 1997. At that time, I was accompanied by a delegation from the Society of St. Vincent de Paul and young people from Massachusetts.

There have been churches on that spot since about the year 400, and the present cathedral was dedicated by Pope Alexander III in the Middle Ages. It has been said that, on the beams of the ceiling, you could see the names of the workers who carved their names there 800 years ago. When one thinks of how many wars, revolutions, and catastrophes the cathedral has survived, to see it now suffer such a terrible tragedy is just devastating.

However, we were glad to learn that the towers and the walls of the nave seem to have been spared and we look forward to the reconstruction of this cathedral -- one of the most visited buildings in the world.

I was also very touched to hear the story of the priest fire chaplain who courageously went into the burning cathedral to rescue the Blessed Sacrament and the Crown of Thorns.

In fact, I was once able to be present for the veneration of the Crown of Thorns at Notre Dame. St. Louis IX brought the crown along with other relics from the Holy Land and built the Sainte-Chapelle to house them. However, after the French Revolution, the crown was moved into the cathedral itself.

We pray that the people of France will be able to restore that important sacred site.

Sunday was, of course, Palm Sunday and it was the first time most of our cathedral parishioners were coming to see the renovations.

Because Palm Sunday also coincided with Patriots' Day Weekend this year, at the conclusion of Mass, we had our traditional Blessing of the Runners for those participating in the Boston Marathon.

Sunday afternoon, Father Alejandro Lopez-Cardinale, Father Carlos Suarez, and Father Michael Nolan came with youth groups from several Hispanic communities to visit the cathedral and to venerate the relic of the Holy Cross.

We prayed together and sang hymns, and I also gave each of the groups of a brief talk. This visit of Hispanic youth groups on Palm Sunday has become something of a tradition in recent years, so we are happy to be able to once again welcome them at the cathedral.

Monday was, of course, Patriots' Day, the day that the Massachusetts State Council Knights of Columbus holds their annual Lantern Award Dinner.

We are pleased that one of our diocesan priests, Father Matt Wescott, who is a Marine chaplain and has been a knight since his college days, was this year's Lantern Award recipient.

There was a great crowd for the dinner, including all the bishops of the state, with the exception of Bishop Rozanski, who was having his Chrism Mass that day. Of course, the state chaplain for the Knights is Bishop Robert Hennessey, and they always have a birthday cake for him because his birthday falls on or near Patriots' Day each year.