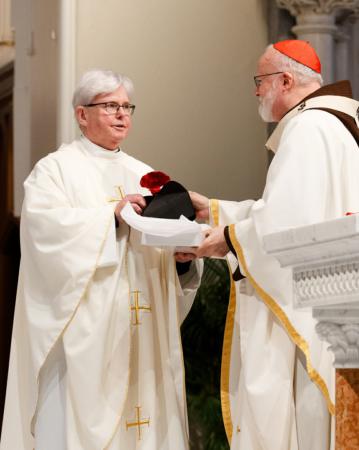 Cardinal calls priests to 'friendship with Christ' at Chrism Mass

BOSTON -- At the conclusion of the Chrism Mass on April 16, Cardinal Seán P. O'Malley announced that Pope Francis named Father Kevin O'Leary a chaplain of His Holiness with the title of reverend monsignor.

A native of South Boston, Msgr. O'Leary was ordained to the priesthood in 1995 and has served in numerous capacities in the archdiocese. Most recently, he has served as the rector of Holy Cross Cathedral since 2008, and was instrumental in many improvements in its parish community, including its historic renovation and restoration.

Approaching the ambo before the final blessing, Cardinal O'Malley praised Msgr. O'Leary's service to the Church and the archdiocese.

"Wherever he has served, he's done it with joyful generosity, with energy and creativity. More than the great talent to clean beautify broken down buildings, Kevin is a real pastor, ready to go to the hospital in the middle of the night, to help a homeless person in need, to start effective catechetical and pastoral programs. He knows his people and he serves them with the pastoral love of a good shepherd," said the cardinal.

The cardinal then presented Msgr. O'Leary with a monsignor's black biretta with a magenta tuft, to the applause of the congregation, which included more than 300 priests, deacons, and bishops assembled for the Chrism Mass.