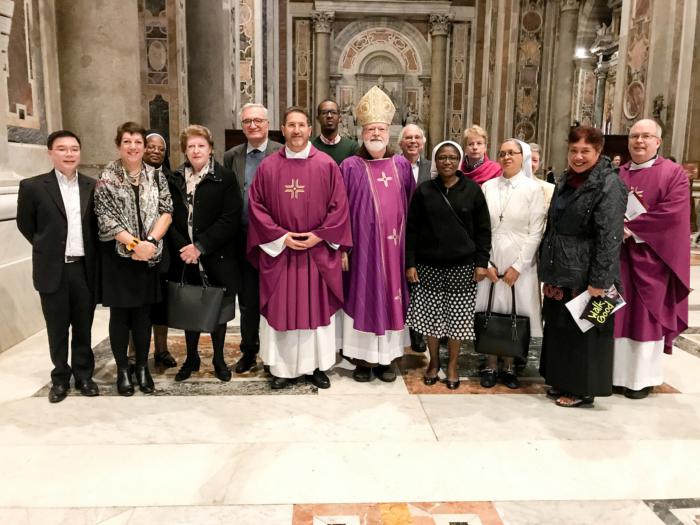 On Sunday, April 7, Cardinal O'Malley celebrated Mass for the members of the Pontifical Commission at St. Peter's Basilica in the Vatican. The Mass was celebrated in one of the underground chapels, the Irish Chapel of St. Columbanus. Pilot photo/CardinalSeansBlog.org

As regular readers will remember, I arrived in Rome late last week for meetings of the Pontifical Commission for the Protection of Minors and of the Council of Cardinals advising the Holy Father.

We also met with Archbishop Scicluna to talk about the aftermath of the February meeting of the heads of bishops' conferences around the world. At that meeting, Archbishop Scicluna gave us a report on what has been done for the vademecum and other kinds of legislation.

One of our members, Professor Benyam Mezmur, also met with the secretary of state regarding the plans for the 30th anniversary of the UN Convention on the Rights of the Child. The Vatican was one of the first signers of that convention, which was ratified in November 1989.

We are also planning a meeting in Colombia this spring on safeguarding, which will include the members of CELAM and CLAR, which is the conference of religious in Latin America.

On Sunday, I was very happy to celebrate a Mass for the members of the Pontifical Commission at St. Peter's Basilica.

The Mass was celebrated in the Irish Chapel, which is one of the underground chapels very close to the tomb of St. Peter. The mosaic you see behind the altar depicts St. Columban and the Irish monks, who were great missionaries.

I returned from Rome on Wednesday to be able to attend the Shiva, the time of mourning after death, for our dear friend Marshall Sloane, which was held at his bank in Medford on Thursday.

Barry Sloane asked me to address the people there, and I was able to tender my condolences and speak a little bit about the extraordinary contribution that Marshall Sloane has made to the whole community.

He was a papal knight of St. Gregory and a man who was not just a great philanthropist but a person who always worked with such integrity -- as a man of faith -- for the common good of the community. He was a supporter of Catholic Charities and our Catholic schools in the archdiocese.

He had a long and beautiful life that touched many people and it was gratifying to see the throngs of people turning out to for the Shiva observance. I am very grateful to have been able to be a part of it.

Reopening of the cathedral

Finally, we are busy planning for the dedication and reopening of the Cathedral of the Holy Cross.

...The upper church of the Cathedral has been closed for nearly two years and we have been using the lower church and the Blessed Sacrament Chapel. The Cathedral is 150 years old, and this is the most extensive renovation it has ever undergone.

It was very important to be able to do it at this time, so that we would continue to have our cathedral. The wiring and other basic systems of the cathedral were in very bad repair and in dire need of replacement. At the same time, the renovation afforded us the opportunity to completely transform the interior of the cathedral with a new sanctuary, new lighting, new flooring, and refinished pews.

In our Catholic tradition, the cathedral has always been an important center of faith and culture -- a place where the local church gathers for significant events -- and our cathedral has a very glorious history. We remain grateful to the immigrant population who, with great sacrifice, built this cathedral 150 years ago and now it is our responsibility to make sure that future generations will be able to have this beautiful temple available to be a part of their spiritual patrimony as Catholics.