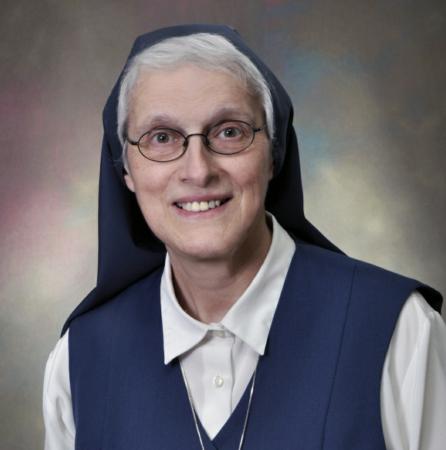 Cardinal Seán P. O'Malley has appointed Sister Germana Santos, FSP as the Delegate for Religious of the archdiocese. Sister Germana succeeds Sister Marian Batho, CSJ who was elected to the General Council of the Sisters of St. Joseph of Boston and so had to relinquish a post she had held for the past 17 years.

Sister Germana said of her appointment, "I am honored and humbled to serve in this position as Delegate for Religious for the Archdiocese of Boston. My gratitude goes to Cardinal Sean O'Malley for his trust in our congregation and in me to fulfill this role." Sister Germana's appointment will be effective May 1, 2019.

Sister Germana comes with a wealth of experience both within her religious community, the Daughters of St. Paul; and in other service she has generously made to local churches and the Universal Church.

Born in Horta, Faial, Azores, sister and her family immigrated to the U.S. in 1967 settling in suburban San Francisco. Her parents, both now deceased, Armando and Maria (do Nascimento Garcês) Santos became American citizens as did sister and her four siblings: Sister Armando Santos, FSP; Grace; and Maria all living in California and a brother John who is deceased.

She completed her high school education at the Daughters of St. Paul High School in Jamaica Plain. She met the Daughters at their media center in Oakland, California, and was immediately impressed by them and especially their primary apostolate -- communications -- in all its forms. She made her first profession in 1974 and her final profession in 1979 -- this year is her "Ruby Jubilee" of religious profession.

Reading over Sister Germana's biography and curriculum vitae one might wonder if she thought she was "joining the Daughters of St. Paul to see the world." Starting out here in Boston with her initial formation and profession and publishing responsibilities at the Jamaica Plain "printing operation" and earning her AB in Liberal Arts from Magdalen College in Warner, New Hampshire.

She soon got to know the international character of her community close up and personal when she was assigned to the Generalate in Rome assisting those entrusted with formation of candidates for the priesthood and religious life; traveling to Kenya, Brazil, the Philippines, Mexico and back to the U.S. attending conferences, providing her own input at conferences and along the way obtaining a Licentiate in Psychology from Rome's Pontifical Gregorian University.

She has served as the Provincial of the United States Province (1999-2005) and of the Delegation of the United Kingdom (2015-2018); she also served in the Sisters' Media Centers in Anchorage; Alaska; Honolulu, Hawaii; Charleston, South Carolina; and most recently in Chicago.

Fluent in her native Portuguese and Italian, Sister Germana has served as a translator for events both within her own religious community as well as beyond.

"Having lived the consecrated life for many years myself, and in various leadership and formation roles in my community, I am looking forward to serving, and collaborating, with the men and women religious of the Archdiocese of Boston, and also doing what I can to promote religious vocations," she said.

In her new role, she will be serving very much as a "communicator" between the archdiocese, and especially Cardinal O'Malley, and the more than 60 communities of women religious and more than 40 communities of men religious. She is eager to meet the almost 2,000 women and men in those communities as she takes up these new responsibilities.

With a keen sense of her desire to build on solid foundations, Sister Germana said "Sister Marian Batho is to be admired for the dedication and competence with which she fulfilled her ministry. She is a person of harmony who always sought to create communion and communication among the men and women religious, and as liaison between them and the Archdiocese of Boston. The religious here will always be indebted to her for her availability, professionalism, kindness and the joyfulness that she displayed in her role. As I now take up the position of Delegate of Religious, my hope is to continue in the same spirit of service and collaboration."