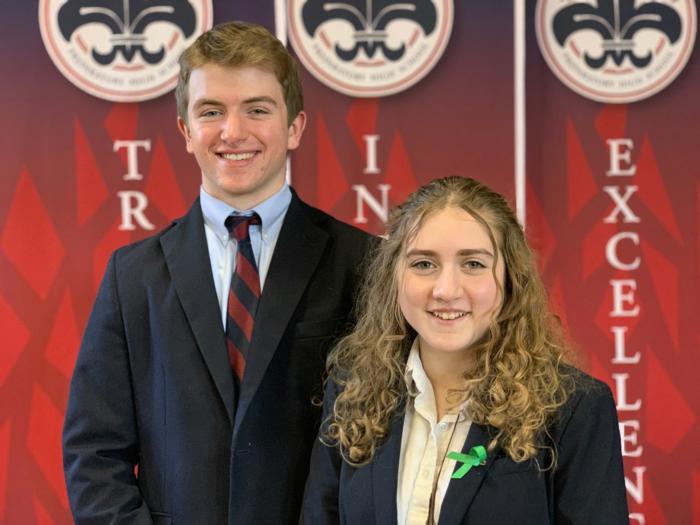 BOSTON -- Academic excellence. Authentic community. Meaningful engagement. Dynamic innovation. These are the four "pillars," or values, on which the culture of St. Joseph Preparatory High School is based.

Class of 2019 students Brendan Murphy of Waltham and Sophia Pappas of West Roxbury spoke with The Pilot on March 28 about how the school's four pillars have shaped their experiences at SJP. Murphy and Pappas both take several AP courses and are active in many extracurricular clubs and activities, including sports, leadership roles, and the arts.

Regarding academic excellence, Murphy and Pappas both expressed appreciation for the availability and willingness of teachers to help students after school.

"That's really gotten me through some of my harder classes, and I think that's been one of the keys to me succeeding academically," Murphy said.

SJP also employs technology programs that help students manage their schoolwork. This year, Murphy said, all the class notes, lessons, and homework for his AP Calculus class are online. He said this is both helpful and an added personal responsibility.

"I think that's been good (for) preparing me for college and the responsibility I'll have with the freedom next year," Murphy said.

SJP has a one-to-one device policy that began six years ago, according to the school website. The seniors have iPads and the underclassmen have MacBook Air laptops. Many teachers use Google Classroom to share resources. SJP also utilizes PowerSchool, a web-based information system that enables students to track their grades.

"It's been really helpful to keep track of what I'm doing in class and see how well I'm doing, and it makes it easier to figure out if I'm missing anything or what I'm struggling with so I can go back to the teacher and ask for more help later," Pappas said.

The school's value of academic excellence ties into authentic community and meaningful engagement. Murphy said the community has challenged him to do better academically.

"The teachers, the students, they've all encouraged me to take on leadership roles I didn't think possible, take harder classes than I first wanted to, but I think without that, I wouldn't have had the success I've had, so I think the challenge that they provide to us is a good thing," he said.

Pappas said the school community "really does feel like a family here. Everyone genuinely cares about you and is there to support you."

She said that when she was in middle school, she had difficulty getting involved in school activities.

"I was really shy and felt like I couldn't do a lot of activities that I wanted to do, but then when I came here, the community was really welcoming and it became easy to participate in different activities," Pappas said.

She has seen students' dynamic innovation through her participation in the robotics club, where they are challenged to build a robot in a six-week period. Pappas said she was not particularly interested in engineering and technology before she participated. It helped her "get more engaged with technology" and gave her the opportunity to learn coding and business strategies.

Pappas has also participated in SJP's drama program since her freshman year.

"It's really nice to see the younger kids coming out of their comfort zones and get more into the acting and performances as the year goes on," she said.

Following graduation, Murphy is looking to major in business. He said that of the four pillars, the one he most wants to carry with him is authentic community.

"I've really found the importance of having support in everything you do, because the community challenges you to be your best," he said.

Pappas hopes to study environmental science. She said she, too, wants a "close-knit community that I can rely on and just feel a part of."

"It's definitely something I'm going to look towards finding or building when I'm in college," she said.