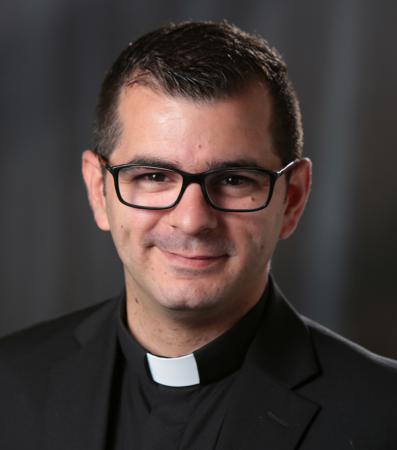 [This is the eighth in a series of articles profiling each of the 13 men who will be ordained to the priesthood on May 18.]

BRIGHTON -- Deacon Marcos Enrique said that growing up surrounded by other families that took their faith seriously caused him to regard the Church as "a mother, not just an institution or a personal thing."

"That experience was central, not only to our faith life but to our life as a whole," Deacon Enrique told the Pilot.

When he was 12, his parents offered to serve as a missionary family wherever in the world there was a need. Cardinal Bernard Law had asked for two Spanish families to come to Boston to assist with the Spanish Apostolate, so Deacon Enrique's family relocated. After starting the archdiocese's first Spanish-language newspaper, his father, Antonio Enrique, would eventually be named editor of The Pilot.

The move, Deacon Enrique said, was "not easy." He had never seen snow before, and their plane landed in the middle of a blizzard. He did not speak English when he arrived and he experienced bullying in school.

"It was a rough experience, making that transition, but all along we had the support of the Church," he said.

Through the Neocatechumenal Way, Deacon Enrique entered the Redemptoris Mater Seminary in Washington, D.C., after graduating from high school. He received his bachelor's degree in philosophy from the Catholic University of America.

But when he left for two years of pastoral service, he began to question whether he was truly called to the priesthood. Through consultation and prayer, he said, he realized he was there for the wrong reasons, to make people happy and meet their expectations.

He was the first point of contact that many students had with the school, so he sometimes acted like a counselor for them. Some asked about receiving sacraments of initiation, but he did not know where to direct them.

"The way religious education is programmed doesn't envision a 16-year-old who hasn't done their first Communion," he said.

He reached out to students who wanted sacraments and met with them once a week for instruction. That first year, he said, six were baptized, about 30 made their first Communion, and about 50 were confirmed. He continued this program for about five years, with older children helping and getting involved in other areas of Church life.

"I think the biggest influence that pushed me to be here (at St. John's Seminary) was my experience in Cristo Rey, working at the school, working at the parish, working with those inner-city, low-income kids, and that how in giving life, I was receiving life," he said.

He once again considered a vocation to the priesthood.

Then, a visit from his uncle, who is a priest, convinced Deacon Enrique to examine the direction of his life and whether God was giving him "the gift of celibacy."

Deacon Enrique recalled his uncle telling him, "God doesn't call us to be either priest or married. God calls us all to love. The question is: Are you called to love in marriage or are you called to love celibately? And then, the Church chooses some from among those called to celibacy to be priests."

Deacon Enrique said his uncle did not tell him to go back to the seminary, but to figure out where God was calling him.

He went on a personal retreat to the Holy Land, and he returned convinced that God was calling him to be a priest for Boston. In 2015, he entered St. John Seminary.

Deacon Enrique said he looks forward to administering the Sacrament of Reconciliation, since as an admissions director he had felt as though he was hearing students' confessions without being able to absolve them. He also looks forward to youth ministry and preaching.

"The preparation and giving of homilies and preaching and so on, really helps me in my own spiritual life," he said.