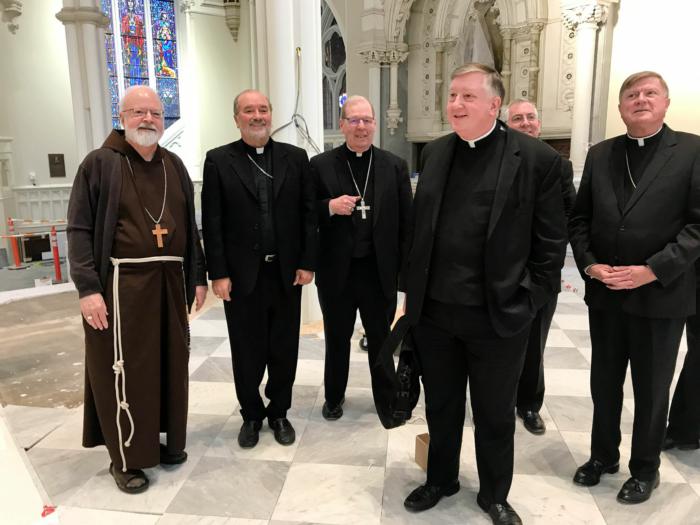 Cardinal O'Malley poses for a photo with bishops of the Boston Province. They had their semi-annual meeting at the rectory of the Cathedral of the Holy Cross to have the opportunity to see the renovations that have taken place there. Pilot photo/CardinalSeansBlog.org

Last Friday, we had our annual Lenten Morning of Prayer and Reflection for employees at the Pastoral Center, which has always been well received. We want people to feel that there is pastoral care available for them. It can be challenging to work for the Church in these difficult times and the spiritual and interior strength that come from our faith can be a great help.

Throughout the morning, there were different talks, combined with opportunities for adoration, prayer, and confession. In the past, the talks were often given by a guest speaker, but this year a number of our employees offered personal testimonies of faith.

We concluded the morning with a special Mass, which I celebrated for the employees in Bethany Chapel.

We are grateful that our workers have a sense of mission and dedication to the Church -- which enhances our ability to carry on the many ministries and apostolates of the Archdiocese of Boston.

On Sunday, I visited the Shrine of Our Lady of Good Voyage for a Lenten Mass. I was happy to see that they finished the stenciling behind the altar and that now they have a new statue of St. Peter.

The Seaport Chapel has been a great success. We are grateful for its presence in this growing neighborhood of Boston and all the outreach they do, particularly to young adults.

"A Nation of Immigrants" Community Seder

Also on Sunday, I went to UMass Boston to participate in the Anti-Defamation League's annual "A Nation of Immigrants" Community Seder. The ADL organizes this event every year and it is a wonderful service to the community, bringing together people from the many different ethnic communities of Boston to celebrate the contribution of immigrants to our nation.

Of course, our immigrant population is an important part of the Catholic Church. Hispanics are perhaps the largest group; however, we also have a large Portuguese-speaking population composed of Brazilians, Cape Verdeans, Azoreans, and of course, those from mainland Portugal. In addition, many Haitians and Vietnamese, as well as Catholics from other Asian and African countries are coming to Boston in large numbers. Boston has a vibrant economy that draws immigrant communities, which is both a blessing and a challenge for the Church.

We are grateful to the ADL for holding up the very positive contributions that immigrants make to our community and for reminding all of us of our immigrant roots. It is important to remember that, beyond the original indigenous population, everyone in this country is an immigrant or a descendant of an immigrant.

Mass for the feast of the Annunciation

On Monday, I went to Our Lady of Providence Seminary in Rhode Island to celebrate Mass for the feast of the Annunciation and to visit our college seminarians there.

After the Mass, we had dinner and a light reception, where I had to chance to meet all the different seminarians who are studying there.

Semi-annual meeting of bishops of the Boston Province

Rather than meeting at the Pastoral Center, we met at the cathedral rectory in order to give the bishops an opportunity to see the renovations that have taken place there. Since the rededication is going to be during Holy Week, it is not a time when it would be easy for them to come, so we were anxious for them to have a chance to see it.