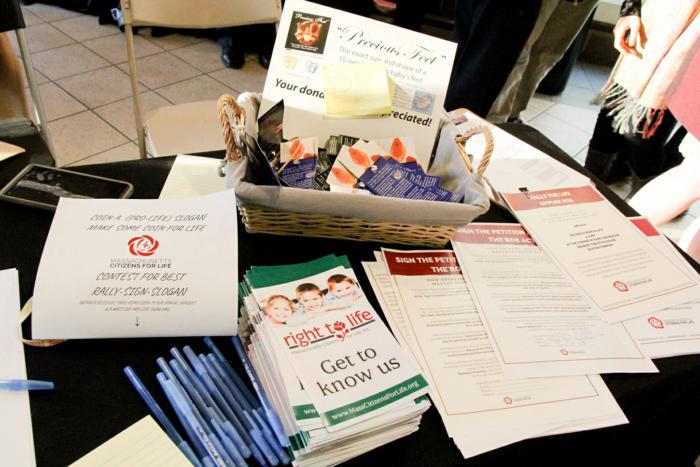 A table with pro-life information stands outside the theater at the AMC Boston Common, where Massachusetts Citizens for Life film held a screening of the film "Unplanned," March 26. Pilot photo/Jacqueline Tetrault

BOSTON -- Massachusetts Citizens for Life sponsored and hosted a screening of the Pure Flix film "Unplanned" on March 27 at AMC Boston Common 19.

Speaking to the Pilot before the screening, Williams said the event was "community-building, solidarity-building, as well as educational."

"It's a great opportunity for us to pull people in from both sides of the political spectrum and find our common ground, which is a real theme of the film," she said.

"Art and story are what touch people and bring us into relationship. And we can change laws all we want, but we won't change abortion in America totally until we make that relationship and find our common ground," Williams said.

Based on the book of the same name, "Unplanned" tells the true story of former Planned Parenthood Director Abby Johnson's career. While she climbed the ranks as a volunteer and employee, 40 Days for Life was founded in her hometown and began holding campaigns of praying for an end to abortion. Johnson left Planned Parenthood after participating in an ultrasound-guided abortion and is now an outspoken pro-life activist. She founded And Then There Were None, a ministry for people who work or used to work in the abortion industry.

At the end of the film, a phone number was shown with an offer of assistance for viewers who have had or are considering having an abortion, or want to leave the abortion industry.

In addition to promoting the film, which is scheduled to be released to theaters on March 29, the screening also raised money for MCFL's campaign against the Act to Remove Obstacles and Expand Abortion Access, or ROE Act, which would significantly expand legal abortion in Massachusetts by removing many restrictions and requirements, such as parental consent for minors seeking abortions.

After the credits finished rolling, Williams thanked the attendees for coming and encouraged them to get involved in local pro-life efforts, such as the 40 Days for Life campaigns in Boston and Beverly. She also spoke about opposing the ROE Act.

"We have to stop it in committee. If it doesn't stop there, it will go through our legislature," she said.

Dr. J. David Franks, MCFL chairman of the board, offered packets of information about the ROE Act. Williams encouraged the attendees to come to a rally at Boston Common at 2 p.m. on March 30 to protest the ROE Act.

"When the abortion lobby has to bring something as extreme as this legislation to our State House, it's the perfect opportunity to expose the truth about abortion," Williams said.

After the screening, the Pilot spoke with viewers about their impressions of the movie.

Mary Roque said she was "shocked" and the movie was "hard to watch." However, she added, "it's the truth, so we need to get it out there."

"The beautiful part of the movie was at the end, you see the mercy of God and the fact that she (Abby Johnson) felt forgiven," she said.

A viewer named Mariana told the Pilot that she works at a hospital and is used to the sight of blood. In spite of this, she found the movie's scenes "horrifying."

"I'm fine with blood, but I couldn't look at those horrific scenes. And I understand why they gave it an R rating, because this is so powerful," she said.

She added that she thinks the movie will prompt "empathetic pro-lifers" who are not involved in activism to "go out and do something about it, because once you see that, you can't un-see it."