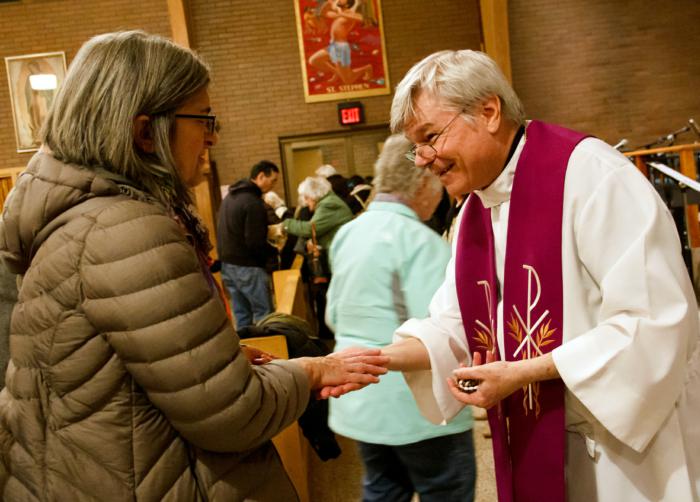 Father James Blount, SOLT, holds a relic of the True Cross for a woman to touch following his Lenten mission talk at St. Stephen in Framingham March 10. Pilot photo/Jacqueline Tetrault

FRAMINGHAM -- Hundreds of people came to St. Stephen Parish March 11-13 to participate in a three-night Lenten mission for healing and hope conducted by Father James Blount, SOLT, a priest known nationally for his healing and deliverance ministry.

Joyful, energetic, and at times theatrical, Father Blount preached about a range of topics, including Marian devotion, stories of conversion, and his work as an exorcist. The three-night mission ended with a healing Mass on March 13.

Father Blount began his March 11 talk by pointing out that it was Lent, which meant he could not say "alleluia" as he told his stories. He said his favorite quote is St. Augustine's words, "We are an Easter people and 'alleluia' is our song."

He distributed prayer cards bearing a recently approved "unity prayer" that Jesus revealed to a Hungarian woman named Elizabeth Kindelmann with the promise that, when she prayed it, he would blind Satan to prevent him from attacking.

Father Blount recalled using the unity prayer on two similar occasions. Both times, someone attending services at his chapel in Georgia started speaking in other languages and foaming at the mouth. Father Blount and his team prayed the unity prayer, and the possessed individual calmed down within a minute.

He made the case that following Christ is an "adventure."

He talked about Cora Evans, an American whose cause for sainthood is being investigated. A Mormon convert to Catholicism, Cora Evans wrote books about God's private revelation to her, including "The Refugee from Heaven," an account of the life of Jesus.

A great deal of Father Blount's first talk focused on Mary, who "knew Jesus best" and "loved him the most," and the power of the rosary. He distributed a handout with the Blessed Mother's 15 promises to St. Dominic and Blessed Alan de la Roche regarding the recitation of the rosary. Father Blount went over each promise and provided anecdotes from his own experiences to illustrate the truth of some of them.

To demonstrate the truth of the first promise, that those who recite the rosary devoutly would receive "special protection and very great graces," Father Blount recalled a time when another exorcist asked for his assistance in performing an exorcism. Just before they began, Father Blount learned that the exorcist had not received permission from the archbishop of the diocese to perform the exorcism.

Realizing that the exorcist would be in danger and probably fail, Father Blount decided to stay and pray for the protection of everyone present. After an hour, the exorcist became exhausted and asked Father Blount to take over. Father Blount instructed everyone to take out their rosaries, since they did not need permission from anyone to pray the rosary. The demon was then exorcized in five minutes.

"When we say 'Mary,' she says 'Jesus,'" Father Blount said, and explained that his own praise comes from "tainted lips," but when Mary prays for him, Jesus receives perfect praise.

After his talk, Father Blount joined St. Stephen Parish pastor Father Francisco "Paco" Anzoategui in leading the attendees in song. Father Blount then let them touch a relic of the True Cross, which he said had caused restoration of sight to the blind and healing to the deaf.

"I think he's really appealing to all ages. He's full of energy and life and you can see God's love in him," a visitor to St. Stephen Parish named Sonia said, speaking to the Pilot after Father Blount's talk on March 11.

"I truly feel that this is the best thing we could have done to prepare us for the great feast of Easter," Father Anzoategui said.