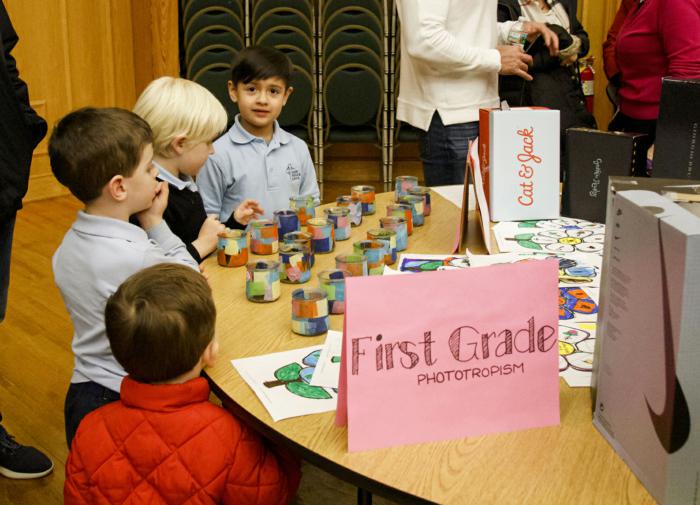 STONEHAM -- Instead of the science fair held in previous years, St. Patrick School held a STEAM fair on Feb. 27 to show the school community the projects students had developed through the new STEAM program overseen by Christine Joines.

Joines first came to St. Patrick's in search of a school for her two children after moving from California in July 2018. Principal Bailey Magazzu gave her a tour and learned that her previous job had been at Serra Catholic School, where Joines had been head of the STEAM (Science, Technology, Engineering, Art, and Math) committee and helped teachers find ways to implement STEAM into their classrooms. Since St. Patrick School was about to launch a STEAM program, Magazzu offered Joines the position of STEAM teacher.

"It was like providence. It worked out perfectly," Joines said.

In a phone interview with the Pilot, Magazzu said students love the STEAM program "because this is more of the manipulative, creative side that sometimes content teachers can't get to. This is all that process of putting things together, making it very physical and making it very hands-on."

Each grade had a different type of project reflecting their studies of various topics. The projects were displayed in Our Lady of Providence Hall for students' families to see during the fair.

Joines, who sees each grade level once a week for 45 minutes, said that although she sometimes gives parameters or hints, the students decide what to do for their projects.

"It's all them. I just facilitate," Joines said.

Kindergarten students learning about the plant cycle planted grass. Students in grade one studied phototropism and constructed mazes to see if plants would grow toward light. Grade-two students built dioramas of different habitats and wrote descriptions of imaginary animals with traits adapted to their environments. Students in grade three had an "invention convention," identifying problems and conceptualizing technology to solve them. Grade four did coding using Scratch, a program developed by the Massachusetts Institute of Technology. Grade five used Google Slides to make animations, and grade six designed and decorated golf holes to demonstrate forces in motion.

Grade-seven students experienced what Joines called "a lesson in failure." They endeavored to make an inflatable scale model of the great pyramid of Giza, but when they tried to put it together, they found it made a rectangle. Joines told them that failure was part of the process.

"Things don't always work out, scientists don't always have the perfect idea, inventors can invent several different things before they actually get the right thing," she said.

The grade-seven students managed to complete their pyramid and displayed it at the fair.

Grade-eight students built arcade games out of recyclable materials, such as cardboard, plastic, and Popsicle sticks. One group designed a simple machine to smash a plate of shaving cream into a volunteer's face, which drew many students and parents to their table during the fair.

Most of the projects were undertaken in groups or pairs, since, Joines said, "the whole point of STEAM is to learn to work together and to collaborate."

There was one notable exception: in addition to helping his class construct the pyramid, grade-seven student Sebastian Pena built a computer. At the fair, he displayed the finished product, alongside a slideshow about the process of building a PC.

He said he spent two years researching PC parts and used an online game, PC Simulator, to prepare for the project, which took him a day to complete.

"It was just a fun build. I loved every moment I had building this," he said.

Joines said she thought the fair was "amazing" and that the turnout was better than they had expected.

"We want to make sure the community comes in and sees what's going on," she said.