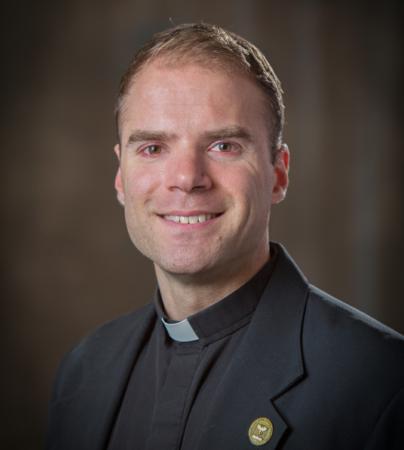 [This is the third in a series of articles profiling each of the 13 men who will be ordained to the priesthood on May 18.]

BRIGHTON -- Born and raised in Lexington, the son of a Methodist mother and Episcopalian father, Deacon William Robinson was baptized in the Methodist Church as an infant.

In an interview with the Pilot, Deacon Robinson said he was involved with many activities and committees in the Episcopal and Methodist Churches, including youth group and the leadership council. He was exposed to Catholic ideas through Sunday school, which introduced him to the works of saints, such as St. Anselm and St. Thomas Aquinas.

"As I got more involved in my faith, I just looked at everything and saw that it all really traces back to the Catholic Church," Deacon Robinson said.

As he went through high school, he said, he felt called to become Catholic.

"It was like God took me by the hand and gently led me to the Catholic Church over these four years," he said.

Deacon Robinson graduated from Lexington High School in 2002 and went on to attend Ithaca College, where he majored in political science and minored in religious studies. In his freshman year, he went through RCIA and made his Confirmation at the Easter Vigil. His plan, he said, was to run for political office, get married, and have a family.

"I really felt the call from God to make the world a better place, and I thought my calling was to political office. So the plan was to run for office and do God's will that way," Deacon Robinson said.

He graduated from Ithaca College in 2006 and went on to get his master's degree in public administration at Suffolk University. He also worked full-time as a contract specialist at Hanscom Air Force Base. During this time, he became involved with St. Brigid Parish in Lexington, leading the young-adult group and serving on the pastoral council.

Deacon Robinson said he began to feel the call to the priesthood in his mid-20s. People both inside and outside the Church told him he would be a good priest. He always responded by saying that it was not for him.

Finally, though, as "all this evidence was mounting for the priesthood," he decided to consider it.

"As soon as I said, 'Alright, let me actually look at this for real,' then everything came together like clockwork," he said.

Deacon Robinson said his conversion to Catholicism and vocation to the priesthood were "a bit surprising" to his family, but "they came to support both of them because they saw God working and how happy I was."

Still, the primary balance of his time after ordination will be serving as a parish priest in the Archdiocese of Boston, something he is very excited about.

"Pope Francis has spoken about God's call for a beautiful springtime in the Church, and that's something I totally believe in. I look forward to being part of that, because even though the Church is going through some rough times right now, like Pope Francis, I really do believe that God is calling for a new springtime. It is something we're all called to be part of, a time of hope and action to build something truly beautiful in the name of Christ. I'm thrilled to be part of that," Deacon Robinson said.