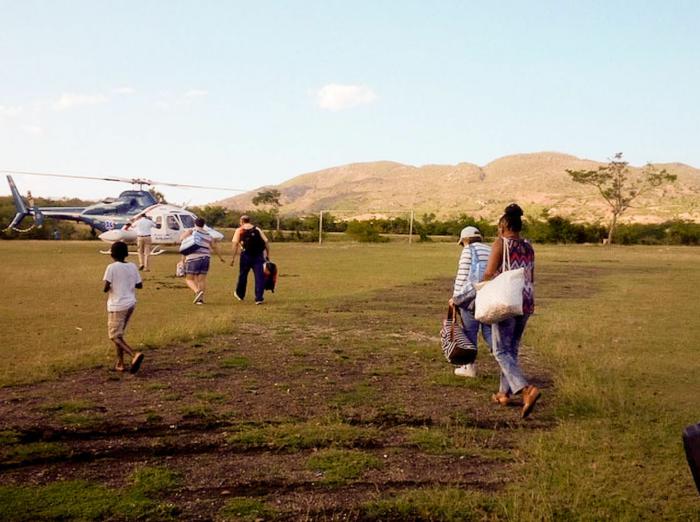 BRAINTREE -- No one expected Morning Star Catholic Collaborative's annual mission trip to L'Asile, Haiti, to differ from any other year. The trip was originally planned for Jan. 29 to Feb. 13, but the missionaries ended up staying until Feb. 16 due to widespread protests that prevented them from leaving.

"We always check with the State Department, and if they say, 'Don't go,' then we don't go. But we had no indication not to go this year," pastoral associate Linda DeCristoforo said, speaking to the Pilot Feb. 22.

The Morning Star Catholic Collaborative includes Our Lady of Grace Parish, Chelsea/Everett, and St. Mary of the Assumption Parish, Revere. The collaborative has had a relationship with St. Joseph Parish in L'Asile for 22 years through the Parish Twinning Program of the Americas. St. Joseph Parish includes seven chapels within a four or five mile radius of the main church.

On these trips, Morning Star parishioners assist in various projects in the churches and schools, such as donating food, holding retreats, and repairing the chapels. Last year the missionaries held a Cursillo retreat for men.

"It was, as far as we know, the first-ever men's Cursillo retreat done in Haiti," DeCristoforo said.

DeCristoforo and nine others participated in the 2019 trip to L'Asile. Each had visited L'Asile at least two times in the past, and some had gone for many more years.

During the first week, the missionaries held a Cursillo retreat for 17 women. Two women from Our Lady of Grace's Haitian community who had gone through Cursillo acted as translators.

"It was a wonderful experience," DeCristoforo said.

One highlight of the trip took place on Feb. 6. While the volunteers were helping repair a playground, a fire broke out down the street. Since L'Asile has no running water or fire department, the people responded to the emergency by forming a bucket brigade. Morning Star missionaries Bill Ells, Johnny Jiminez, and Bob Heinle joined the local priests in filling 50-gallon drums and five-gallon buckets with water from the river and driving them by truck to the scene of the fire. People came out of their homes with any container they had and joined the line. Eventually, they threw rocks on the building's tin roof to collapse it and smother the fire.

"It was truly amazing to see how everyone knew exactly what to do, with little or no resources," DeCristoforo wrote on her daily blog on the Morning Star Collaborative website.

Some of the missionaries, including DeCristoforo, stayed for the entire duration of the trip. Others came only for the Cursillo week and a second group replaced them for the second week.

When they picked up the service team from the airport in Port-au-Prince, the missionaries learned there was going to be a "manifestation," or what would be called a protest or demonstration in the United States. DeCristoforo said this happens often and involves shutting down the city for a day. The volunteers returned to L'Asile expecting the manifestation to last a day or two.

Cities and towns between Port-au-Prince and L'Asile participated in the manifestation, calling on Haitian president Jovenel Moise to resign. The people of L'Asile showed their support for the manifestation by burning tires and shutting down traffic.

On Feb. 12, the missionaries learned from their hosts in St. Joseph Parish that the manifestation was still going on and was more serious than usual, so they would not be able to return to Port-au-Prince the way they had arrived on the parish bus.

For five days, the volunteers were confined to the grounds of St. Joseph Church. They communicated with Rep. RoseLee Vincent and Sen. Edward Markey's offices as well as Morning Star pastor, Father John Sheridan, and the archdiocese.

After they had considered every possible transportation option, the archdiocese's Office of Risk Management arranged to have a helicopter airlift them. They could only take 20 pounds of luggage and had to be ready to leave at a moment's notice, but the helicopter kept being delayed.

"It was that kind of anticipation that was kind of difficult. But we were in good spirits," DeCristoforo said.

The missionaries tried to make use of their extra time in the parish. They held Mass every day and continued to find projects in the church. The parish priests and staff made sure they were safe and even prepared a Valentine's Day dinner for them.

"They tried everything that they could possibly do to make us feel comfortable, as we would for them," DeCristoforo said.

Finally, on Feb. 16, the missionaries were airlifted from L'Asile to Port-au-Prince. From there, they traveled by plane to Fort Lauderdale, Florida, and then on to Boston.

DeCristoforo said they felt "a great sadness" when they left, especially when they waved goodbye as the helicopter took off.

"Even though we were breathing a sigh of relief for us, we knew that they were still suffering and this manifestation was going to affect them, too," DeCristoforo told the Pilot.

She added that the manifestation would cause shortages of food and drinking water in L'Asile, since roadblocks would prevent trucks from transporting goods to markets.

In her last blog entry she wrote, "We need to continue to pray and support our brothers and sisters in L'Asile, just as they took care of these 10 missionaries who were far away from their homes for nearly the past three weeks."