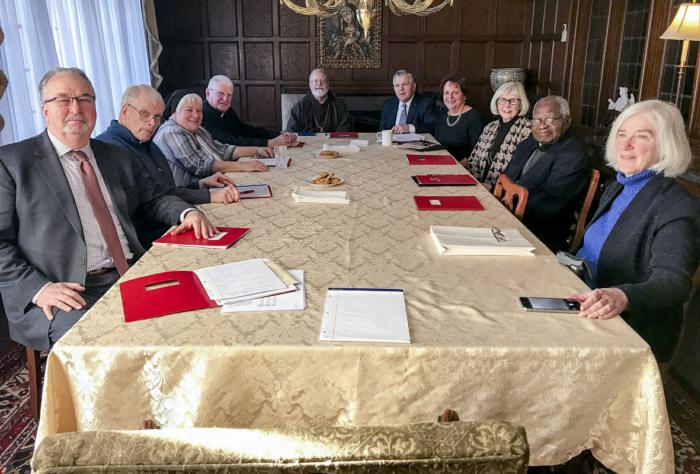 Cardinal O'Malley poses for a photo with the members of the board of the Pontifical Mission Societies of the Archdiocese of Boston. Pilot photo/CardinalSeansBlog.org

On Friday morning, I went to PwC's Boston office in the Seaport to attend the annual Celebration of Excellence Breakfast, sponsored by the Catholic Schools Foundation (CSF). We are grateful to Mr. John Farina for hosting us in that spectacular venue.

The gathering brought together Catholic Schools Foundation supporters and seniors from 22 Catholic high schools across the archdiocese -- recipients of CSF scholarships. It was encouraging to see how many fine young people have benefited from those scholarships.

I was also pleased to see that a number of young people there had been with me in Washington at the March for Life in January or in Panama for World Youth Day.

There was a speaking program during which Mr. Farina encouraged the young people to pursue their passion in life as they continue their education and careers. We also heard from one of the seniors as well as a graduate who spoke about the difference that attending a Catholic school made in their lives.

I also offered some remarks, in which I spoke on the importance of Catholic education, congratulated the students on their achievements, and thanked all the benefactors of the Catholic Schools Foundation.

Each year around this time, we hold a discernment weekend retreat for men considering a vocation to the priesthood. It is an opportunity for them to visit our seminaries and learn more about seminary life. Typically, the retreat is held with two tracks: one for older men, who would be candidates for Pope St. John XXIII Seminary, and another for younger men, who would be candidates for St. John's Seminary.

So, on Friday afternoon, I joined with the older group at Pope St. John XXIII Seminary. There were about half a dozen men at that retreat. Then, as they continued the retreat, I went on to join the other group of about 45 men in the evening, who were meeting at the Fatima Shrine in Holliston. I remained with them all day Saturday and preached the retreat for them. It was a full schedule, which also included opportunities for them to hear the experiences of our seminarians, pray together, and meet some of the seminarians and priests of the archdiocese.

On Sunday morning, the retreat concluded with a Mass at St. John's Seminary in Brighton.

I told the retreatants that if any of them had not yet informed their girlfriends that they were coming on this retreat, we could Photoshop mustaches and dark glasses on them!

On Monday afternoon, we had a meeting of the board of the Pontifical Mission Societies of the Archdiocese of Boston. It was good to be together with our director, Father Gabe Troy, as well as Maureen Heil and all the other members of the board.

It is always encouraging to see their dedication, not to only raising money for the missions, but perhaps even more importantly, to raising missionary awareness. For example, we spent a great deal of time discussing the work of the Missionary Childhood Association, which seeks to engage young people in the missionary work of the Church at a young age and, hopefully, lead them to develop an awareness and care for the missions that will continue throughout their lives.

Boston has a very long tradition of supporting the work of the Pontifical Mission Societies, particularly since the time of Cardinal Richard Cushing, who was himself director of the Office of the Propagation of the Faith in the archdiocese and the founder of the St. James Society. I am grateful to the board members and staff of the Pontifical Mission Societies who dedicate themselves to continuing that tradition.