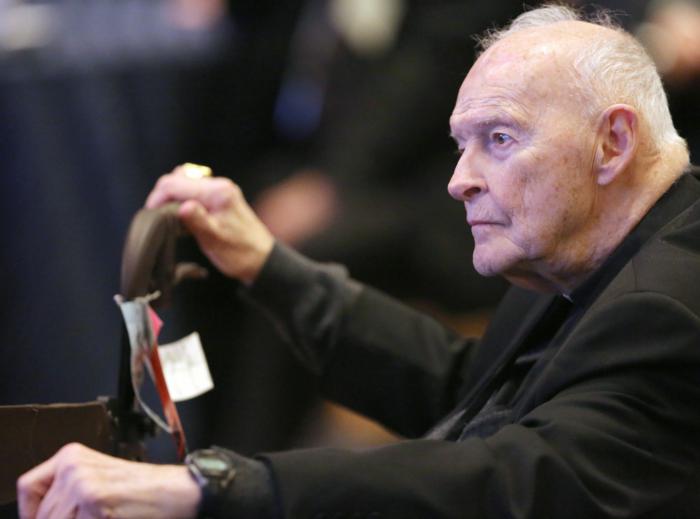 In this 2017 file photo, former Cardinal Theodore E. McCarrick of Washington is pictured in Baltimore, Md. A recent news report says a decision on whether to laicize Archbishop McCarrick could happen in mid-January. (CNS photo/Bob Roller)

McCarrick removed from the priesthood after being found guilty of abuse

In the U.S., a sobering mood after news of McCarrick's laicization

The Archdiocese of Boston released the following statement from Cardinal Seán P. O'Malley regarding the dismissal of Archbishop Theodore McCarrick from the clerical state -- Editor.

Today Pope Francis rendered as final and irrevocable the recent decision by the Congregation of the Doctrine of the Faith to dismiss former Archbishop Theodore McCarrick from the clerical state. This action by the Holy Father is important in administering justice for the crimes and sins committed by the former Archbishop.

The seriousness of the final dismissal notwithstanding, it cannot in and of itself provide healing for those so terribly harmed by the former Archbishop's scandalous violations of his ministry or for their families. Also, the Holy Father's action by itself will not bring about the healing needed in the Catholic community and our wider society; both are justifiably appalled and outraged that the former Archbishop could have for so long inflicted harm on minors and young adults vulnerable in the life of the Church.

As leaders for the Church, as cardinals and bishops, we are rightfully judged by our actions and not our words. Sincere apologies and petitions for forgiveness must be part of the healing process but standing alone they ring hollow in light of the revelations of sexual abuse by clergy that have come forth during the past year and almost twenty years prior. Leadership in the Church must enforce accountability for cardinals and bishops if we hope to have the opportunity to engage the laity in the work of tangible change in the Church.

In the Archdiocese of Boston there are strong policies and procedures to protect our people and as best possible prevent any occurrence of abuse and we carefully monitor compliance. All allegations of abuse of a minor are immediately reported to law enforcement. The Archdiocese provides ongoing pastoral and medical care for survivors of sexual abuse for as long as needed. We hold these commitments and continual vigilance to be our moral responsibility and can never allow for complacency. With the help of God and each another may we be faithful to this most sacred trust.