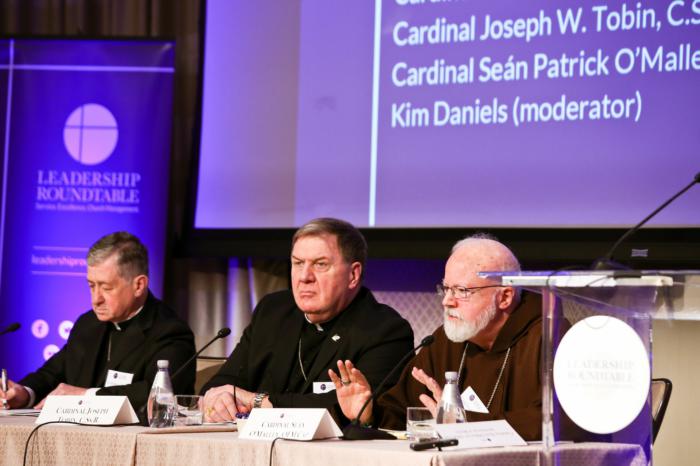 Cardinal O'Malley attended a summit in response to the abuse crisis in Washington, sponsored by the Catholic Leadership Roundtable. Pilot photo/CardinalSeansBlog.org

The winter months are often a time of year when many people are called home to God, and in recent days we have lost three fine priests of the Archdiocese of Boston -- Father Paul Bailey and Father Vincent Maffei and Bishop Walter Edyvean.

Father Maffei served for several years in the Metropolitan Tribunal, and for 20 years, until his retirement in 2008, he was pastor at St. Mary in Randolph, where he was much beloved. He died last week and his funeral was Thursday.

Father Bailey had a graduate degree in social work, so he spent the early years of his priesthood working in Catholic Family Counseling Services and at Catholic Charities, where he was the director of different regional offices. In the 1980s, he went on to be pastor at St. Michael Parish in Lowell, and in the 1990s, he became pastor at St. Peter Parish in Plymouth. I know he had a great impact on both parishes. He died on Wednesday and his funeral is next week in Plymouth.

Bishop Edyvean touched the lives of so many priests during his many years as a seminary professor and running Villa Stritch in Rome -- and of course, during his time as auxiliary bishop of the archdiocese. His death last Saturday was sudden and I was privileged to be with him when he died.

His funeral was this morning. There were dozens of priests and bishops with us, a testimony to the impact he had.

Father Stephen Linehan delivered a touching homily, in which he recalled many fond memories of Bishop Edyvean.

I also offered some remarks before the final commendation.

Summit in response to the abuse crisis

On Friday, I traveled to Washington to take part in a summit in response to the abuse crisis sponsored by the Catholic Leadership Roundtable. It was a gathering of about 200 lay and Church leaders from throughout the country to identify best practices and come up with concrete recommendations to address the current crises.

During the summit, there was a dinner at which the Leadership Roundtable presented Peter Lynch with their J. Donald Monan, SJ Distinguished Catholic Philanthropy Medal for his support of many philanthropic causes, particularly the Catholic schools in the Archdiocese of Boston.

I was happy to be there to congratulate Peter on this honor.

On Saturday, I returned to Boston, and that evening, I went to St. Paul Parish in Cambridge, where I met with FOCUS missionaries and other local college students who were involved in FOCUS's nationwide gathering, the SEEK conference in Indianapolis. We gathered for evening prayer and a time of dialogue, followed by a pizza dinner with the young people.

The SEEK conference was held in early January, and I would have liked to have been able to go with them. However, it coincided with the U.S. bishops' retreat at Mundelein Seminary. So, this was an opportunity to catch up with them. Based on what they told me, it was a wonderful experience for all of them.

On Sunday, I went to Our Lady of Lourdes Church in Carver to bless their new parish renovations.

The church there is very interesting because it is in a former shopping center, and they have really created a beautiful worship space, bringing in new Stations of the Cross, statues, pews, and other ecclesiastical refurbishments that they did not have before. It is quite stunning. They have completely transformed the space into a beautiful worship site.

Afterward, there was a luncheon reception with the parishioners and many of them told me how pleased they are with the wonderful transformation of their parish.