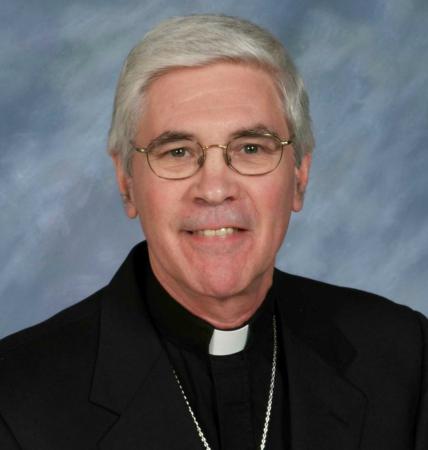 A Philadelphia native, born in the City of Brotherly Love on June 21, 1940, he was the son of the late Albert and Mary (Goncalo) Sylvia. The family moved to Winthrop when he was three years old and he attended St. John the Evangelist School and the parish high school at Immaculate Conception, Revere, before entering St. John Seminary as a member of the class of 1966.

Richard Cardinal Cushing ordained him to the priesthood at Holy Cross Cathedral on May 26, 1966, a month shy of his 26th birthday. The cardinal gave him his first assignment as an assistant at St. Joseph, Pepperell. Three years later, he began a six-year assignment with the Missionary Society of St. James in the Apostle. During his South American ministry, he mastered Spanish. He returned to the archdiocese in 1975 and for the next decade and a half he served the growing Hispanic population of the archdiocese at St. Joseph, Lynn; St. Rose of Lima, Chelsea; and Blessed Sacrament, Jamaica Plain.

In 1991, he was asked to master Portuguese, something he happily did since it was a bit of return to his roots: his grandparents had immigrated to the United States from the Azores. Later that year, he was named pastor of Sts. Peter and Paul (Portuguese) Parish, Lawrence, and in 2003, pastor of Our Lady of Fatima (Portuguese) Parish, Peabody.

Cardinal O'Malley named him to the faculty of Pope St. John XXIII National Seminary in Weston in 2008, where he served as a spiritual director until he was granted senior priest/retirement status on June 30, 2013. He enjoyed being a pastor to future pastors, especially helping future priests in their personal relationship with Jesus Christ, the Great High Priest.

In his retirement years, he lived at Youville House, Cambridge; then at Regina Cleri Residence, Boston, and lastly at Mary Immaculate Health Care, Lawrence, where he died on Jan. 9, 2019.

The Society of St. James the Apostle was having its annual meeting in Lima, Peru, and Merrimack Regional Bishop Robert Hennessey celebrated Mass for Father Sylvia at the Society's Center House in Lima. He was joined by the members of the society at the meeting and by Bishop John Arnold of Salford, England, concelebrating the Mass on the day of Father Sylvia's funeral.