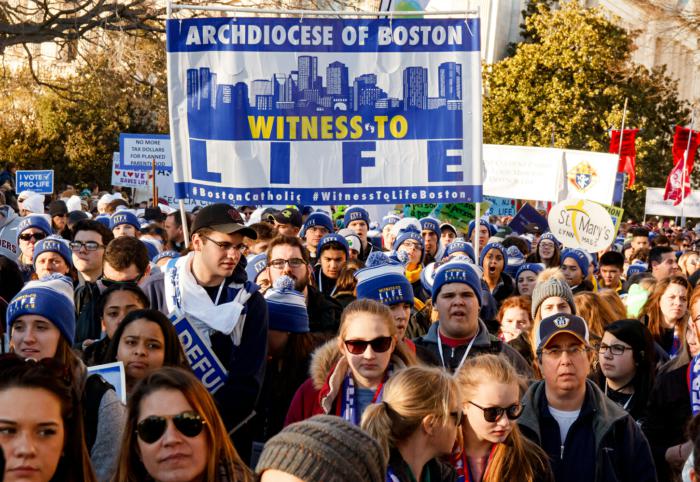 Participants in the Witness to Life Pilgrimage take part in the 2018 March for Life. Several hundred pilgrims will be participating in the march again this year. Pilot file photo/Mark Labbe

BRAINTREE -- Pro-life pilgrims from the Archdiocese of Boston are preparing to travel to Washington, D.C., next week to attend the 46th annual March for Life.

Approximately 190 pilgrims will travel by bus through the archdiocese's Witness to Life pilgrimage to participate in the March for Life on Jan. 18. In addition to those going on the Witness to Life pilgrimage, 150 people from Cardinal Spellman High School and about 300 from various schools and parishes in the archdiocese are traveling independently.

The Office of Lifelong Faith Formation's Witness to Life Team offered two options with different lengths of time for the trip.

A group of 40 pilgrims signed up for the "24 Hours for Life Track." They will depart Thursday evening, travel overnight, spend the day of Jan. 18 in Washington, D.C., and begin the return journey immediately after the march.

Those on the "Stay, Pray, and Play Track" will depart on the morning of Jan. 17 and spend the following two nights in a hotel. This will allow them to participate in events other than the march, such as the Life is VERY Good rally and visits to various churches for Mass and adoration.

The two Witness to Life tracks and other groups from the archdiocese will cross paths the morning of Jan. 18 at Sacred Heart Shrine in Washington, D.C., where Cardinal Seán P. O'Malley, a regular participant in the March for Life, will join the pilgrims for Mass.

The original "Stay, Pray, and Play" itinerary included time for sightseeing on Jan. 19. However, since the Women's March will take place in Washington that day and block access to some museums, the Witness to Life Team decided to instead have the buses leave Washington, D.C., after Mass that morning.

The first March for Life took place in 1974, a year after Roe v. Wade decision decriminalized abortion. It has been held annually every year since then around the anniversary of Roe v. Wade.

The march begins at the Lincoln Memorial and ends in front of the Supreme Court.