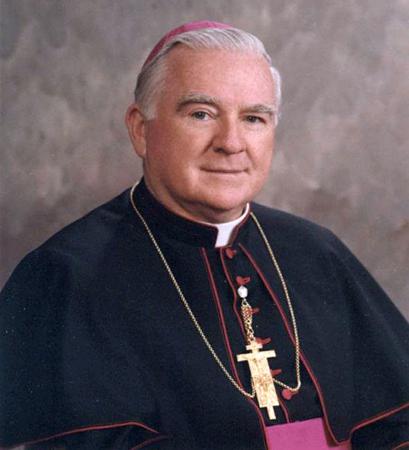 A son of the late John and Jennie (Bath) Mulvee he was born in Boston on Feb. 15, 1930. He was graduated from Boston Commerce High School in 1948 and spent a year at Newman Prep High School to get a foundation in Latin in preparation for seminary. Archbishop Richard Cushing came to the school and told the students "We have more priests than we need in Boston, go to another diocese." So young Robert went north to Manchester and began seminary studies at St. Thomas Seminary, Bloomfield, Conn.; St. Paul Seminary, Ottawa, Ontario; and the North American College, Louvain, Belgium. He was ordained to the priesthood at Louvain on June 30, 1957.

He returned to New Hampshire to take up pastoral duties as chaplain of St. Charles Orphanage; then as an assistant at St. Leo, Gonic; St. Peter, Farmington; St. Catherine of Siena and St. Joseph Cathedral, both in Manchester. In 1961 he was sent to Rome for studies in canon law and received the doctorate at the Pontifical Lateran University in 1964.

Returning to the diocese, he was appointed to several diocesan posts by then Bishop Ernest Primeau including assistant chancellor; tribunal judge and notary; diocesan master of ceremonies; and chancellor in 1972. Pope St. Paul VI named him a Papal Chamberlain in 1966; and a Prelate of Honor in 1970. The same pope named him titular bishop of Summa and the first auxiliary of the Manchester diocese. Manchester Bishop Odore Gendron ordained him to the episcopate at St. Joseph Cathedral on April 17, 1977.

He served as auxiliary of Manchester until Pope St. John Paul II named him the seventh bishop of Wilmington in February, 1985, here he served for the next ten years. In February 1995, the same pontiff named Bishop Mulvee the coadjutor bishop of Providence, he succeeded to the see as seventh bishop on June 11, 1997 when Bishop Louis Gelineau resigned on having reached the age limit.

Known as a priests' bishop, he was greatly esteemed by the priests of the three dioceses where he served as auxiliary or diocesan bishop. He was gregarious and loved being among priests and people alike. At the celebration of his 60th anniversary as a priest and 40th as a bishop in 2017 he said "You think of all the people whose lives you've touched and those who have touched you -- because it's a two way street."

A frequent visitor to the Boston area, he would stop in to offices of The Pilot at Franklin Street to say hello to his friend Msgr. Peter V. Conley. He made sure that he said hello to the rest of the staff as well. Shortly after his appointment to Providence as coadjutor bishop, he arrived a Pilot staff member said the "new co-agitator" bishop of Providence was here, which brought a roar of laughter from him when he heard it.

During his retirement he split his time between Providence and South Florida; in both places he continued to offer episcopal and priestly ministry; celebrating Masses in South Florida parishes and confirmations back in Providence. His health began a steady and very rapid decline in October.

Bishop Mulvee's Funeral Mass will be celebrated at Providence's Cathedral of Sts. Peter and Paul on Thursday, Jan. 10, 2019 at 11:00 a.m. Following the Funeral Mass Bishop Mulvee will be buried in St. Ann Cemetery, Cranston.