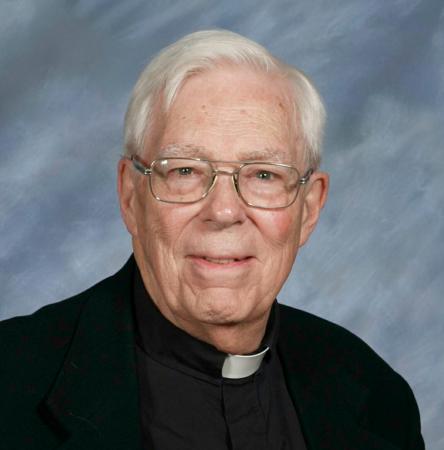 Born in Pittsfield on Nov. 7, 1926 and raised in Boston's West Roxbury section he was one of the three children of the late Henry and Gertrude (Flaherty) Lucey. He grew up in Holy Name Parish with his brother, Henry, deceased, and his sister Gertrude who still lives in West Roxbury.

He attended the prestigious Boston Latin School and on graduation in 1944 he entered St. John's Seminary as a member of the class of 1951. He was the sole surviving member of that class. Archbishop Richard Cushing ordained him at the cathedral on April 11, 1951.

Following ordination he was assigned as an assistant at St. Joseph Parish in Pepperell; as he once described it "then the most rural parish in the archdiocese." It could not have been more different from his home parish.

In September 1954 he was recalled to Boston and assigned to teach English and Latin at Cardinal O'Connell Seminary, recently opened in Jamaica Plain, literally next door to West Roxbury. Father James E. O'Leary, pastor of St. Camillus, Arlington recalled that he was "a very good teacher." And was much involved with student life serving as faculty "Master of Games" and participating with the seminarians in flag football and tennis.

Father O'Leary recounted another story; one Father Lucey would certainly have appreciated. Father Lucey had returned an English test and the "mark" at the top was "80." Father O'Leary was delighted as he had not thought he had done that well. On further examination he realized that the "mark" was his room number and the real mark elsewhere on the page was more what he had expected.

Father Lucey was also widely appreciated as a spiritual director of seminarians of a priests. He continued as professor when the seminary in Jamaica Plain closed and was consolidated on the Brighton campus.

Humberto Cardinal Medeiros named him pastor (in team ministry) at St. Timothy in Norwood. For the next 20 years he served either as moderator of the team ministry, administrator or pastor of the Norwood parish.

He loved being in the parish and the Norwood parish experience growth in population and activity during his tenure.

In 1996 Cardinal Bernard Law granted him senior priest retirement status and he initial remained in residence at the Norwood rectory before retiring to his family home in West Roxbury. While able to he assisted in area parishes; until his eyesight began to fail and driving was not an option any longer.

He did keep up contact with former students, now brother priests. They found him quite alert, up to date and as usual interested in them and their ministry.