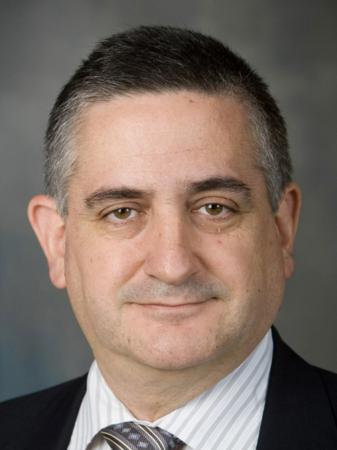 A familiar and welcoming face around the Pastoral Center and, prior to the move to Braintree, for many years at the chancery in Brighton, Fernando Fernandez died Dec. 12 in Revere at the age of 59. He had been waging a heroic battle against cancer for the last four years.

Fernandez served the Archdiocese of Boston for over 20 years as the office coordinator of the Hispanic Apostolate Office, and more recently as the translation specialist for Spanish in the Office of Lifelong Faith Formation and Parish Support.

He is survived by his wife Maria (Montserrat) Fernandez and his six children: Juan; Javier; Manuel; and Raquel, all of Revere; Andres of Maynard and Pablo of Everett. Pablo Fernandez is a staff member of Pilot Bulletins.

Michael Lavigne, assistant cabinet secretary for Evangelization and Discipleship, described him as a "humble, gentle, and dedicated disciple of Jesus Christ. He was an example of the hope we should have, in any situation, because of a God who loves us into existence each and every moment."

Fernandez arrived in the United States with his wife and six children from his native Spain in 1996. They came following an invitation of Cardinal Bernard Law, as a missionary family with the Neocatechumenal Way to work with the newly arrived Hispanic immigrant community at Our Lady of the Assumption Parish in East Boston; there he was instrumental in starting a Hispanic apostolate ministry which he helped lead for the next two decades.

During these years, beyond his contributions to the Church both at the parish and archdiocesan level, Fernandez was also a catechist with the Neocatechumenal Way, and helped form Neocatechumenal communities in several parishes of the archdiocese including Immaculate Conception in Revere, the Cathedral of the Holy Cross, Immaculate Conception in Marlborough and Our Lady of the Assumption in East Boston.

Fernandez's Funeral Mass was celebrated at Our Lady of the Assumption Church in East Boston on Dec. 14. It was presided by longtime family friend Father George Szal, SM and was concelebrated by 26 priests, a testament to the impact that his ministry has left in the archdiocese.

Cardinal Seán P. O'Malley, who was in Rome for meetings with the Holy Father, sent his condolences to the family and celebrated Mass for the repose of Fernandez's soul on the day of his funeral.

He was interred at St. Mary Cemetery in Lynn.