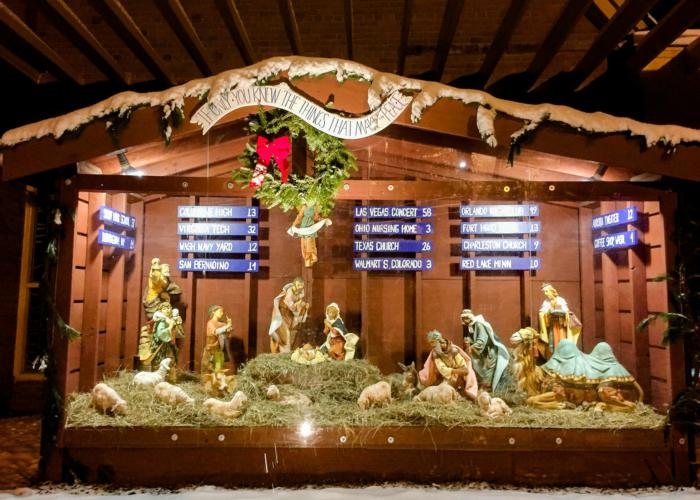 Plaques with the locations and death tolls of mass shootings in the U.S. hang over the Nativity scene outside St. Susanna Church in Dedham, Dec. 9. Pilot photo/courtesy Father Stephen Josoma

DEDHAM -- A statue of baby Jesus lies before Mary and Joseph in the nativity scene at St. Susanna Parish in Dedham. They rest on a pile of hay, statues of the three wise men and farm animals placed nearby.

It's a peaceful scene, which makes the list of the locations and death tallies of 16 mass shootings that have occurred in the U.S. since 1999 above it stand out all the more.

Speaking to The Pilot Dec. 11, St. Susanna's pastor, Father Stephen Josoma, said the location of the list calls to mind the gift of peace the Jesus gave the world, a gift that he believes has, for the most part, "been left unwrapped."

It's meant to make passersby "pause and think," Father Josoma said, and reflect on a culture of violence that "just seems like part of the new normal."

The list begins with the 1999 shooting in Columbine High School, including acts of violence like the November shooting in the Sutherland Springs, Texas church, and the shooting at the October concert in Las Vegas.

"We tried to get a spectrum," said Father Josoma, demonstrating the wide-reach of violence.

He said that after each moment of violence, there's a time for prayer, "but then that kind of fades away to the next time."

With the Nativity scene, "We want to keep the conversation going."

While the creche and the list have been up for only a matter of days, Father Josoma said he has already received phone calls from unhappy people.

Some of people say the list goes against the message of the Nativity, but Father Josoma disagrees.

Jesus "was born in a violent world," he said. "He was condemned to capital punishment, so to speak."

That way is emblazoned above the scene with the words "If only you knew the things that make for peace," from the Gospel of Luke, pointing to Jesus' message of peace to the world.

"We try to bring a little bit of light into darkness in all sorts of ways," said Father Josoma, and "raise people's awareness that what we do today has a consequence for tomorrow."