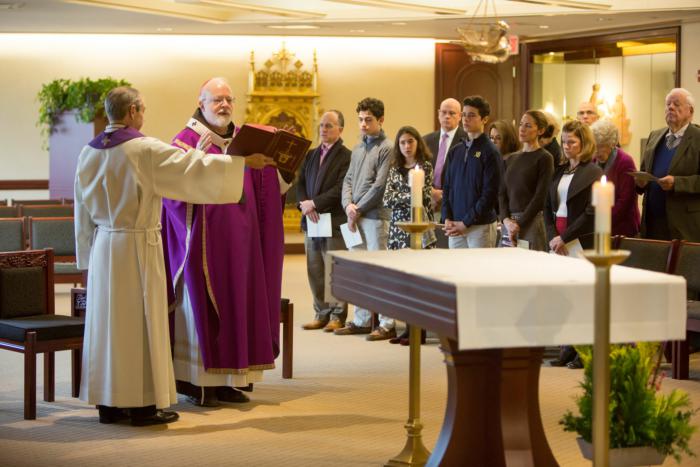 'Sunday morning we had our annual Mass and breakfast to express thanks for our Appeal benefactors. During breakfast, I addressed the benefactors, and we also heard a talk by MC Sullivan on the efforts of the diocese in promoting palliative care.' Pilot photo/CardinalSeansBlog.org

Last Friday (12/1), I celebrated the funeral Mass of long-time Cathedral parishioner Mary McHale. Mary was 87 years old and was baptized at the cathedral. For a time her family lived in Canada, but she returned to the cathedral and became very active in the Legion of Mary.

In the 1960s she began her work with homeless women, trying to help them get out of a life of prostitution, drugs and addictions. So, with the help of the Legion of Mary, she founded the Sancta Maria House, the state's first overnight shelter for women, here in the South End. Literally thousands of women have been helped through the work of that shelter. And, of course, she began doing this at a time when there were very few programs for the homeless and marginalized.

In the last couple of years she had been a resident at Marian Manor but still remained very active in the local Legion of Mary group here at the cathedral. Everyone in the cathedral parish revered her, and many parishioners accompanied us for her funeral.

Later that day, I was visited by Father Bill Brown of the Oblates of the Virgin Mary and Jennifer Baugh of the group Young Catholic Professionals. Father Brown was approached by the YCP, which is active in 40 cities throughout the United States and are interested in beginning in Boston. So, Jennifer, who was one of the founders, came to talk to me about that. That very night there was a meeting of young Catholic professionals to discuss the possibility of beginning a chapter in Boston. We have such a young population here and many Catholic professionals. So this would certainly be a welcome addition to our diocese and I encouraged them to actively explore the possibility of beginning their work in Boston.

That evening, I attended the Advent celebration of the LIFT Ministries, which was held at Immaculate Conception Church in Malden. I was so impressed to see a full church of hundreds of young people gathered for an evening of prayer, worship, confession, Eucharistic adoration as well as a number of witness talks. I was happy to address the young people and speak to them a little bit about the importance of the season of Advent.

Healthcare for the Homeless tour

That afternoon (12/2), I went to join a tour of the facilities of Boston Healthcare for the Homeless on Albany Street. Boston Healthcare for the Homeless is an initiative that was begun many years ago by a very fine Catholic doctor, Dr. Jim O'Connell. They have several different facilities but this is the primary one where they provide health care. ...They provide just an extraordinary service to the homeless population of Boston.

That evening, I went to St. Clement Church in Somerville to join in a gathering of the local members of Communion and Liberation. At least once a year I like to visit the community. Of course, they visit me at the Cathedral on Good Friday at the conclusion of their Good Friday Stations of the Cross procession, as well. During the evening, we had a lovely dinner and heard witness talks about the different formation programs and ministries that they are engaged in. We concluded our time together with a very enjoyable sing-along.

That evening (12/5), we had one of our regular meetings of the Archdiocesan Pastoral Council, at which we heard a presentation by MC Sullivan on efforts to legalize assisted suicide in Massachusetts.

It also happened to be the birthday of Sister Marian Batho, so we surprised her with the gift of a small Christmas tree. After the APC gathering, I paid a quick visit to one of the classes being conducted by the Masters of Arts in Ministry program, which has recently relocated to the Pastoral Center.