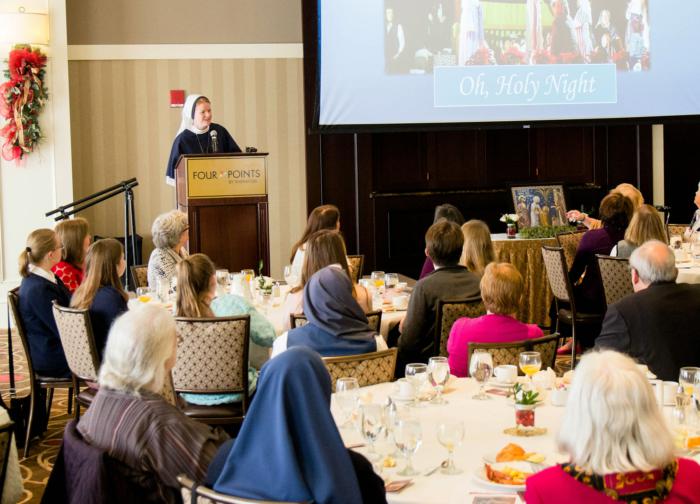 Daughters of St. Paul celebrate the season with annual concert

NORWOOD -- It is God's will for us to find joy this Advent season, said Sister of Life Therese Marie, speaking to the nearly 300 women gathered for the Women Affirming Life Mass and Breakfast, Dec. 2 in Norwood.

The Mass and breakfast is sponsored annually by the Archdiocese of Boston's Pro-Life Office. The event began with a Mass, celebrated by Cardinal Seán P. O'Malley, followed by the breakfast at which Sister Therese delivered her keynote.

The joy of being chosen, she said, comes from God having chosen each and every one of us, and the love that he feels for us. "Our deepest identity" is that we are his "beloved daughters," she said, specifically addressing the women in the room.

It is his desire for us to be closer to him, and that may be made possible through prayer and love, and by looking inward into our own hearts and giving up the parts of us that do not want to be in communion with the Lord, she said.

One thing we might need to give up is shame, said Sister Therese, and one thing that can alleviate shame is the Sacrament of Reconciliation.

She spoke about the importance of confession, about how it can help eliminate shame by simply bringing it front and center. Confession, she said, can help lead people back into the Church.

In the Gospel, many of those people who are "lost," are later "found," she said, adding that it is "never too late for the Lord."

That is the joy of being found, Sister Therese said. "The Lord can, and does, make all things new."

The joy of being a gift is to acknowledge that being a woman is in itself is a gift, that motherhood is a gift, she said.

Our culture, she said, "desperately needs" the witness of the feminine perspective, and that motherhood, "the craft of focusing on the good," is vitally important.

Referencing Archbishop Samuel Aquila of Denver, she said that "beauty will save the world, and there is nothing more beautiful than a mother loving her child into goodness, and nothing we need more urgent."

It is important to listen to others, she continued, and to "nourish others," both in a physical sense and in a spiritual one.

Women have "a beautiful way of creating community," said Sister Therese, adding that "we are created to build each other up, encourage one another, to root for one another."

Cardinal O'Malley also spoke during the breakfast, and focused on some of the "challenges" to life the Church is currently facing. One such challenge, he said, is physician-assisted suicide, which is currently being pursued legislatively in the Commonwealth.

Calling assisted-suicide a "very slippery slope" to euthanasia, the cardinal said that "we're counting on Women Affirming Life and all of our parishes and leaders to help" combat legalizing it.

"Your presence here today, your prayers, your witness, is so important and so appreciated, and it is making a difference," he said.

Danielle Holland, a parishioner of Our Lady of Good Voyage Shrine in Boston, is a cousin of Sister Therese. She said she had heard about the Women Affirming Life Mass and Breakfast for years, but finally attended this year in support of Sister Therese.

"It's great to be able to be here and see her and be part of such a great cause," she said.

Holland came with her infant daughter, Reagan, and another cousin, Jamie. She said she hopes to attend future gatherings.

"I think it's a beautiful way to start off the Advent season, and I think we will definitely return again next year," she said.