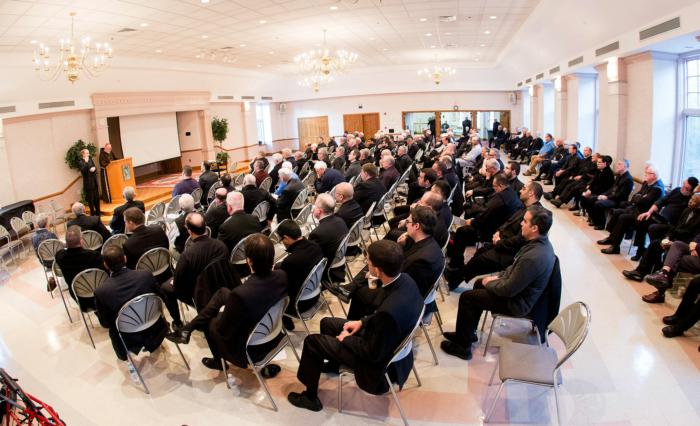 WESTON -- During the 2017 Fall Presbyteral Convocation, held Nov. 29 at St. Julia Parish in Weston, hundreds of priests of the Archdiocese of Boston listened to the findings of the Pastoral Planning Advisory Board (PPAB) on the state of the archdiocese's pastoral plan, Disciples in Mission.

Consisting of seven laypeople and one priest, the PPAB was founded in 2014 to evaluate the implementation of Disciples in Mission.

Disciples in Mission was set into motion in 2012 by Cardinal Seán P. O'Malley with a goal of conserving parish resources to allow them to better focus on evangelization. To do that, the 288 parishes of the archdiocese are being organized into 135 collaboratives over the course of several years.

The surveys called on pastors to evaluate the impact Disciples of Mission has had on their personal health and well-being, their faith and personal prayer, and their relationship with the parish community.

Members of the PPAB offered a report on the results of the surveys, which indicated that the majority of 39 out of 47 pastors who responded to the survey indicated that local Pastoral Plans are moderately to highly useful, and parishes and parish communities had moderate to good participation in implementing those plans.

Most pastors felt that transition training conducted by the archdiocese was done happily and enthusiastically, and most pastors agreed it had an impact on the transition.

Support from the archdiocese was generally viewed as positive and useful, however, some pastors noted some of the trainers did not have enough experience in parishes.

Many pastors felt that more volunteers were necessary in the collaboratives, but were also at a loss as to how to attract them.

Pastors were generally split on how they saw Disciples in Mission impacting their personal lives and faith journeys. About half said since becoming a pastor of a collaborative, there has been less time to pray and connect with parishioners, while about 30 percent said they now have more time.

About 90 percent said that in multi-cultural parishes, it has become more difficult to retain relationships with parishioners.

A little over half of the pastors said Disciples in Mission has had a negative impact on their physical and mental health, and they have experienced more stress, anxiety, and less free time.

When asked about personal prayer, about half the pastors said Disciples in Mission has either had a positive impact or no impact on it, while about one third said it has had a negative impact, noting more responsibilities and less free time as the causes.

Members of the PPAB did note that pastors seemed to indicate that the first year or two years of collaborative life are the most difficult, with it becoming easier and more routine after that.

John Straub, chief financial officer (CFO) and chancellor of the archdiocese, noted that Disciples in Mission has been successful.

After an initial financial drop-off, he said, parishes in collaboratives have seen, on average, a two percent gain in collections.

This indicates that people are positively responding to collaboratives, making the overall goal of creating disciples successful so far, he said.

Responding to concerns over personal health, Cardinal O'Malley pointed to a recent study by the archdiocese's Clergy Funds, which indicated that overall, priests are healthier, in part thanks to a number of new mental and physical health programs the archdiocese provides.

The study "seems to show our health seems to be a little better, actually," the cardinal said, although he made it clear that he also would be taking the feedback into consideration.

He said he hopes that, if the number of priests being ordained continues to grow, larger parishes in which priests might struggle, will "be able to be 'unhooked' and be made single parishes once again."

It is ideal that a priest ministers to a single parish, he said, and "hopefully, as time goes on, we will be able to do that."